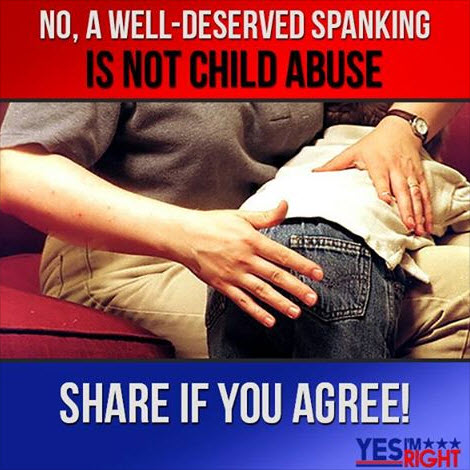 Yes, some of us grew up in environments where spanking was practiced. I received a spanking or two when I was a child. But I must say that I always thought they were ridiculous. My parents did not score points when they spanked me. They looked progressively weaker. Fortunately, I can’t remember more than three of four occasions. On one, it was my grandfather. But all that is anecdotal.

My question to those who agree with this slogan and share it: Who decides what a well-deserved spanking is? The child? The parent? Who decides?

And who protects the children?

Having been around social workers, childcare providers, educators and child advocates for most of my career, I believe that there are too many stark raving batshit crazy parents out there beating up their helpless children because they — well, they deserved a good spanking.

If a parent has to resort to beating, that parent likely has never learned how to properly educate, and the well-deserved spanking today just needs to be followed up by another one tomorrow — because the damn kid never learns.

One thought on “A Well-Deserved Spanking”