On Friday I was in downtown New York and had a couple of extra hours available. I visited the World Trade Center and went to the Observatory on the 100th to the 102nd floor. You can enlarge all the photographs below by clicking on them.

Tickets to the top for adults are $32. Lines can form very quickly. It’s best to come early. Even when it’s not busy, plan on spending an hour from lining up to getting to the observation platform. But the visit is well worth it.

Below is the view due north toward the Empire State Building and all of uptown.

To the right behind the Empire State Building you can see a thin white “stick.” This is the recently completed building at 432 Park Avenue, which at a height of 1,396 feet is the tallest residential building in the Western Hemisphere and the second tallest building in New York City, behind One World Trade Center, and ahead of the Empire State Building. When measured by roof height, however, 432 Park Avenue is the tallest building in New York City, surpassing One World Trade Center by 28 feet. 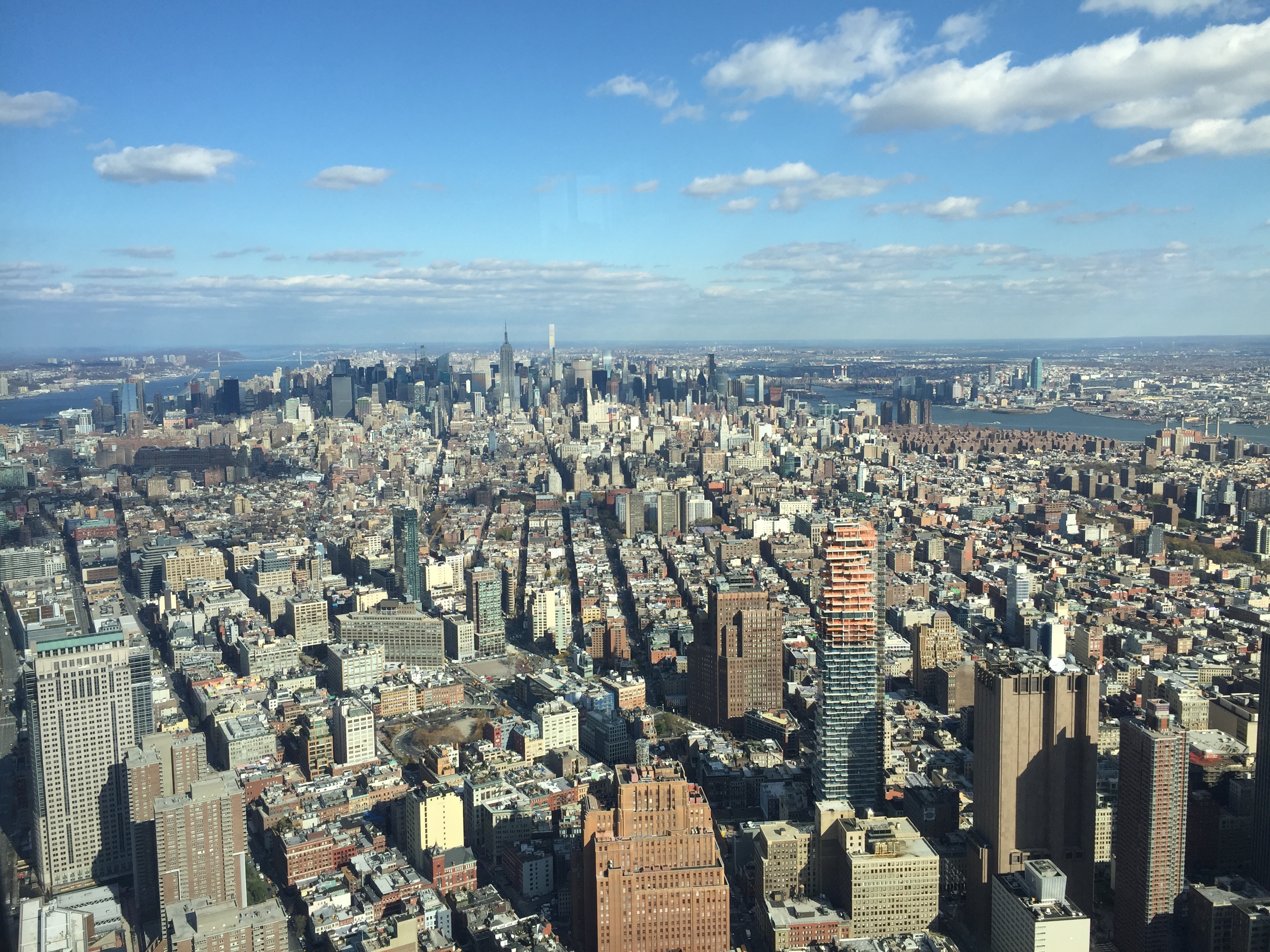 Here is what it looks like inside on the 100th floor. 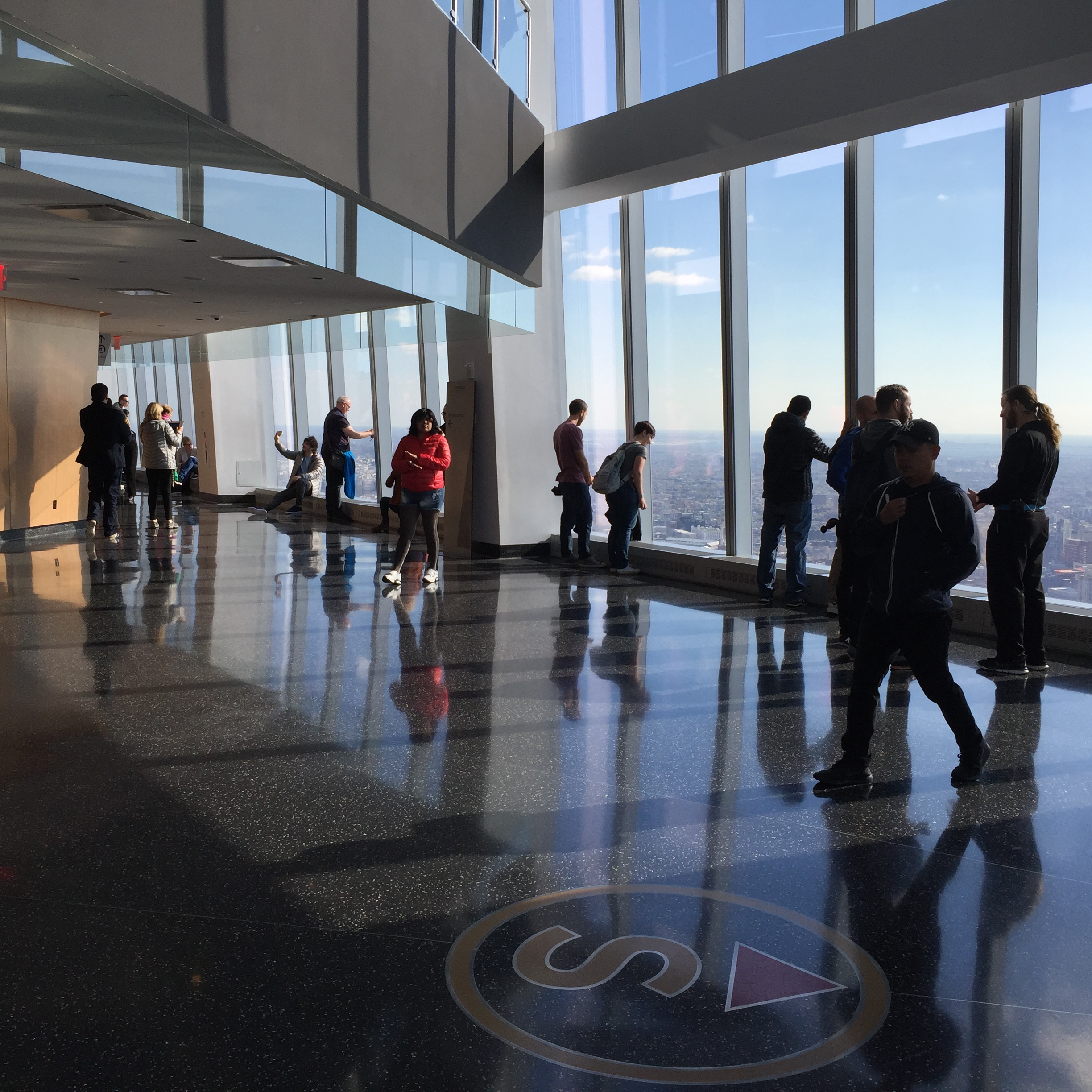 Here is a view of the Woolworth Building (green roof in center) which was the highest building in New York in 1913 at 792 feet. The top 30 floors are now luxury condominiums going for $3000 a square foot. Behind you can see the Brooklyn Bridge. 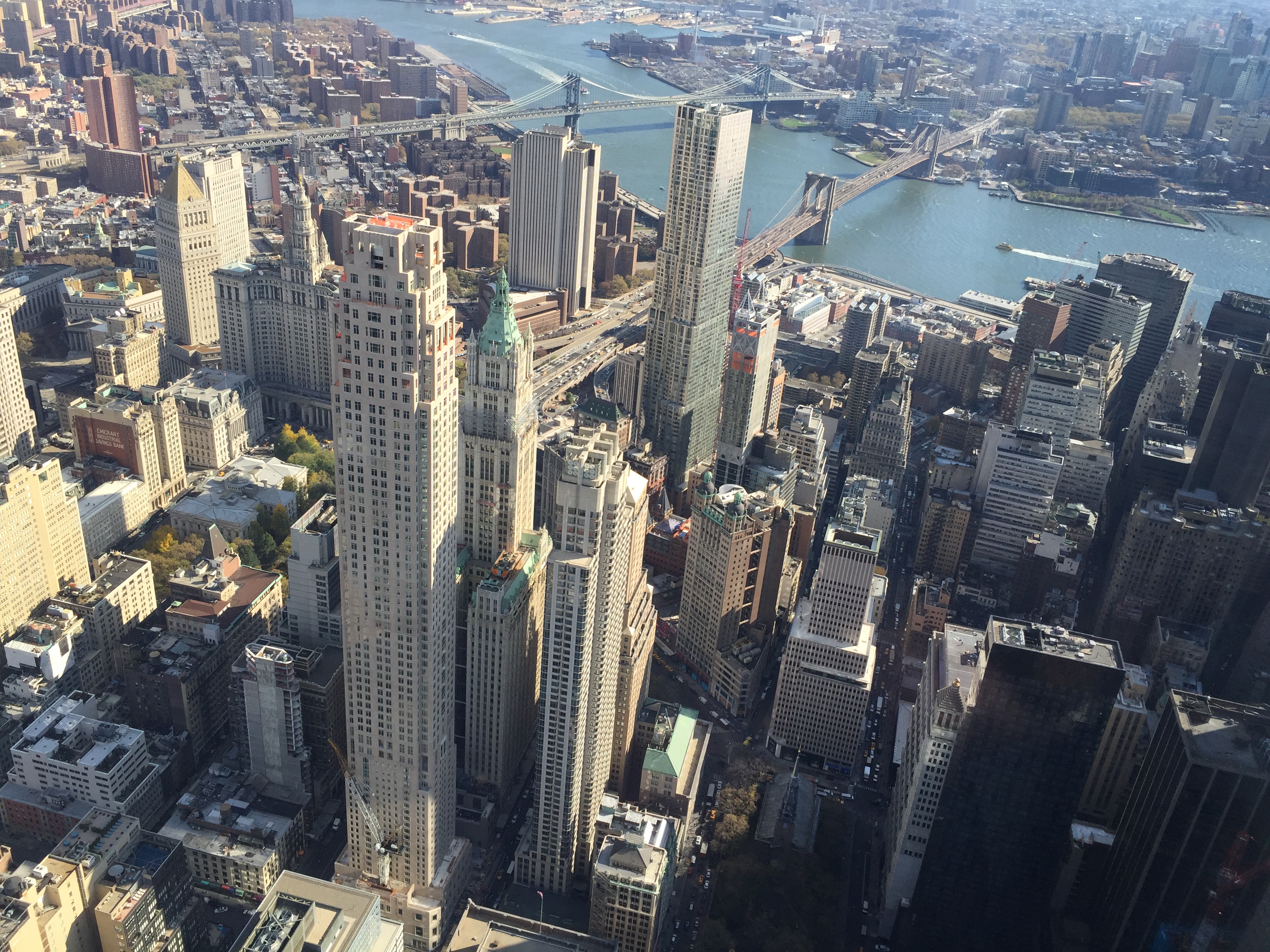 Here is the view toward the financial district, with Wall Street being right in the middle of the picture. The black slab in the front left is the Millenium Hilton which was right next to the twin towers when they fell. 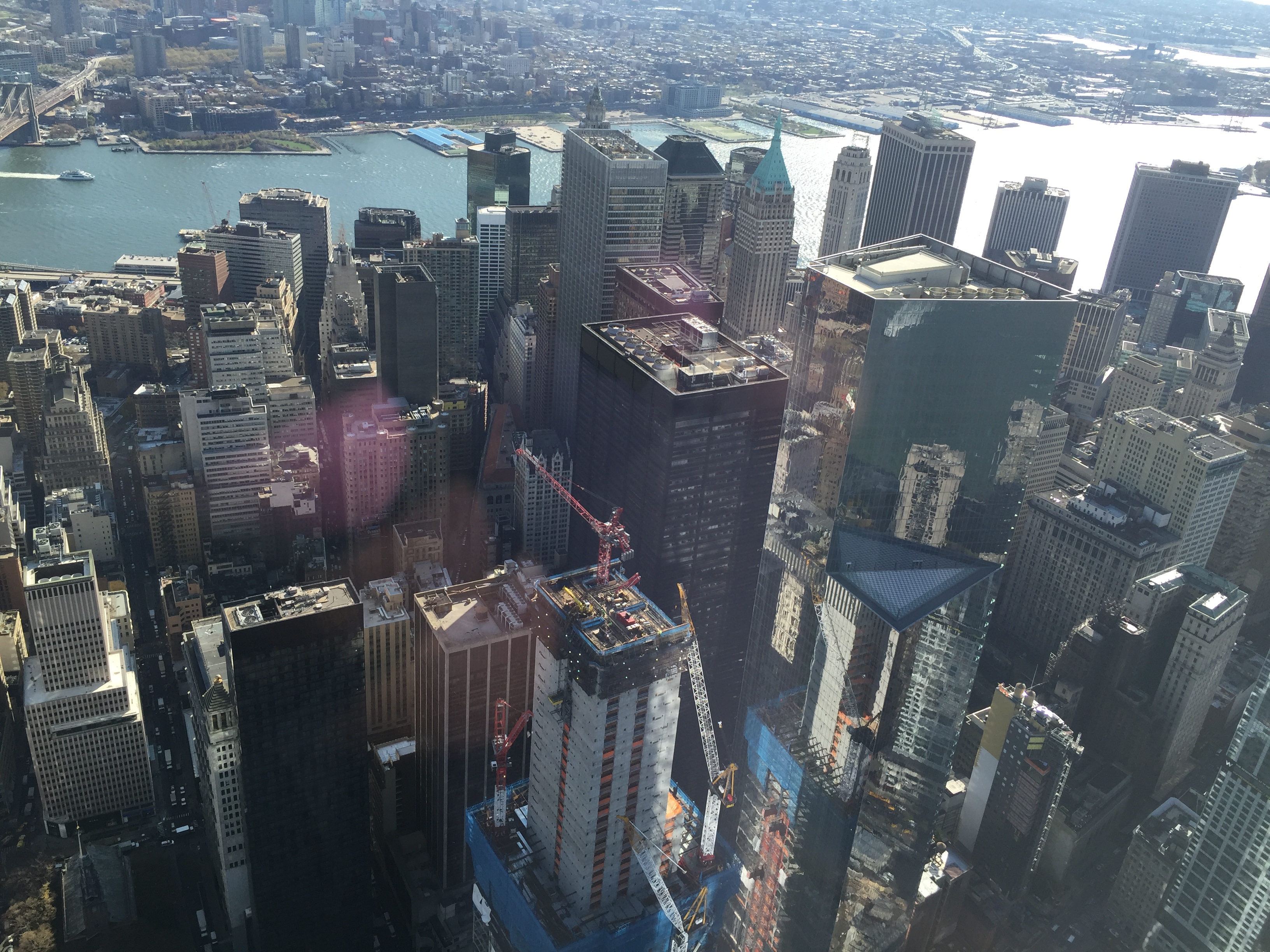 This photo is straight down looking east. The ribbed structure on the bottom is part of the 9/11 Memorial. It’s huge looking up at it from the street level. Here it is hardly visible. The blue structure on the right with the cranes is one of the new World Trade Center buildings still under construction. You can also see the park and the roof of St. Paul’s chapel in the center of the picture, to the left of the black slab of the Millenium Hilton. 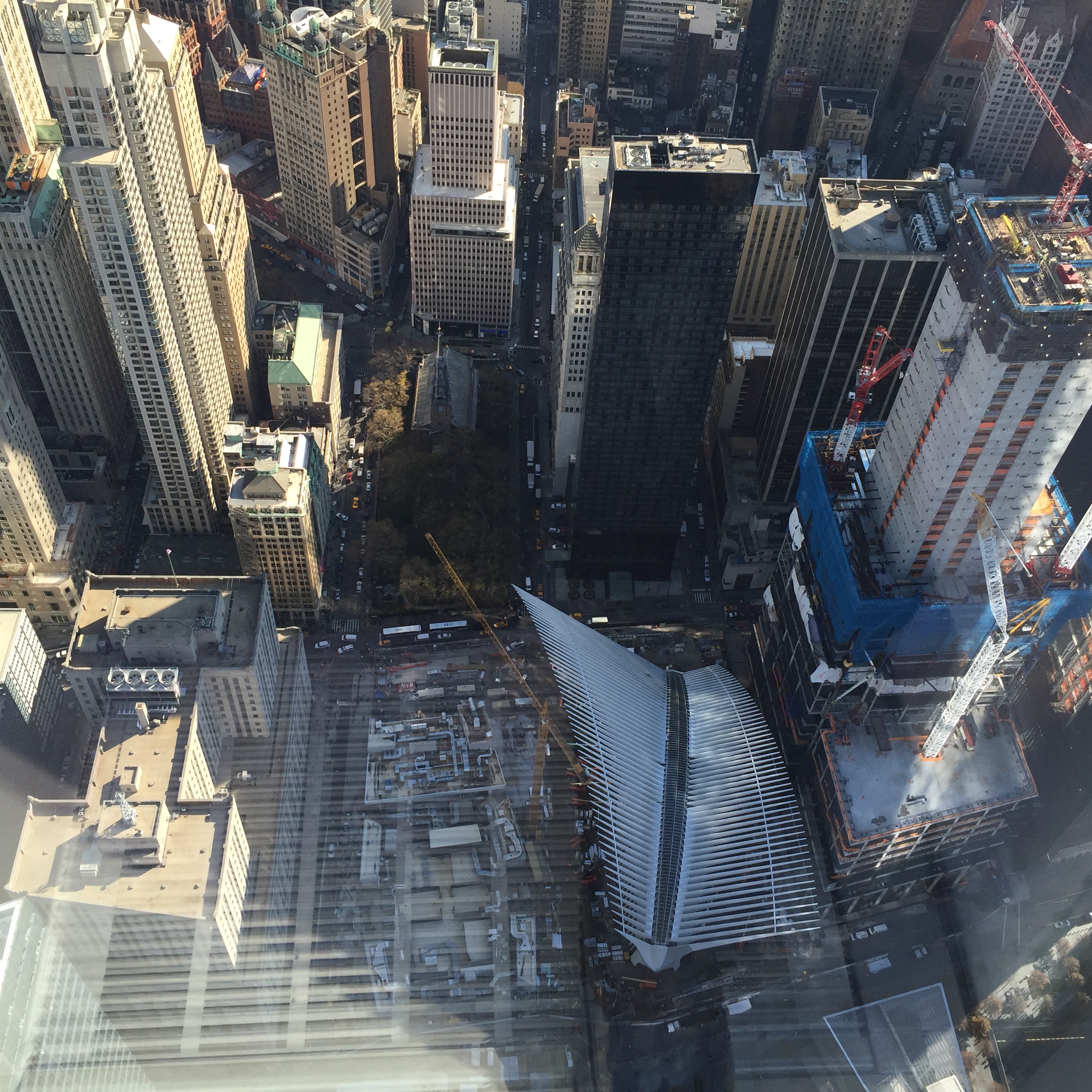 Below another view of the Memorial with the two new towers till under construction. The quality of this photograph is poor, since the morning sun reflected brightly on the glass pane in this view. But when you look carefully you can see the rectangular reflection pool which is exactly where the south tower stood. The other pool is closer to the building and therefore is not visible from the top. 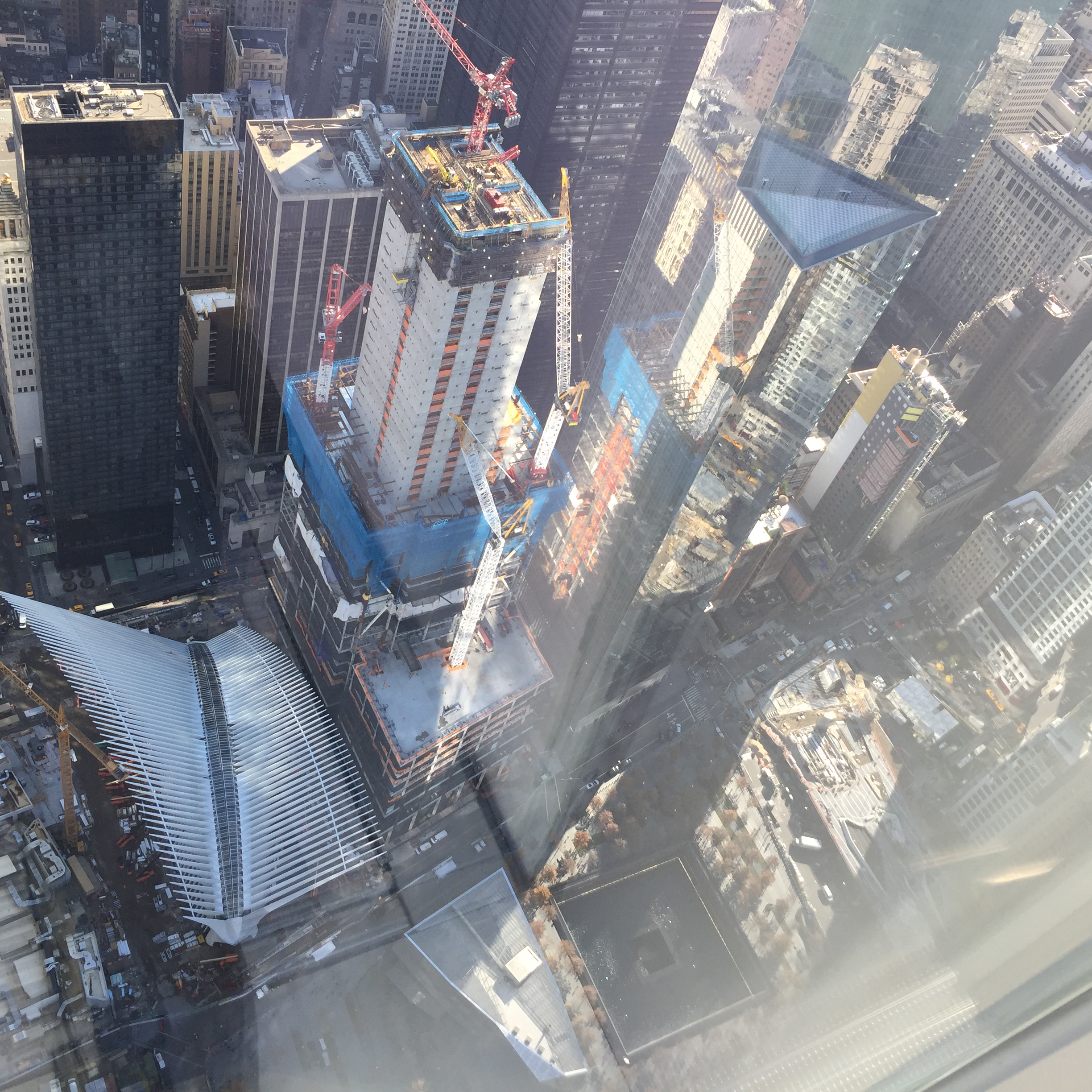 Looking south, there is the Statue of Liberty in the center, and Ellis Island slightly closer on the right. 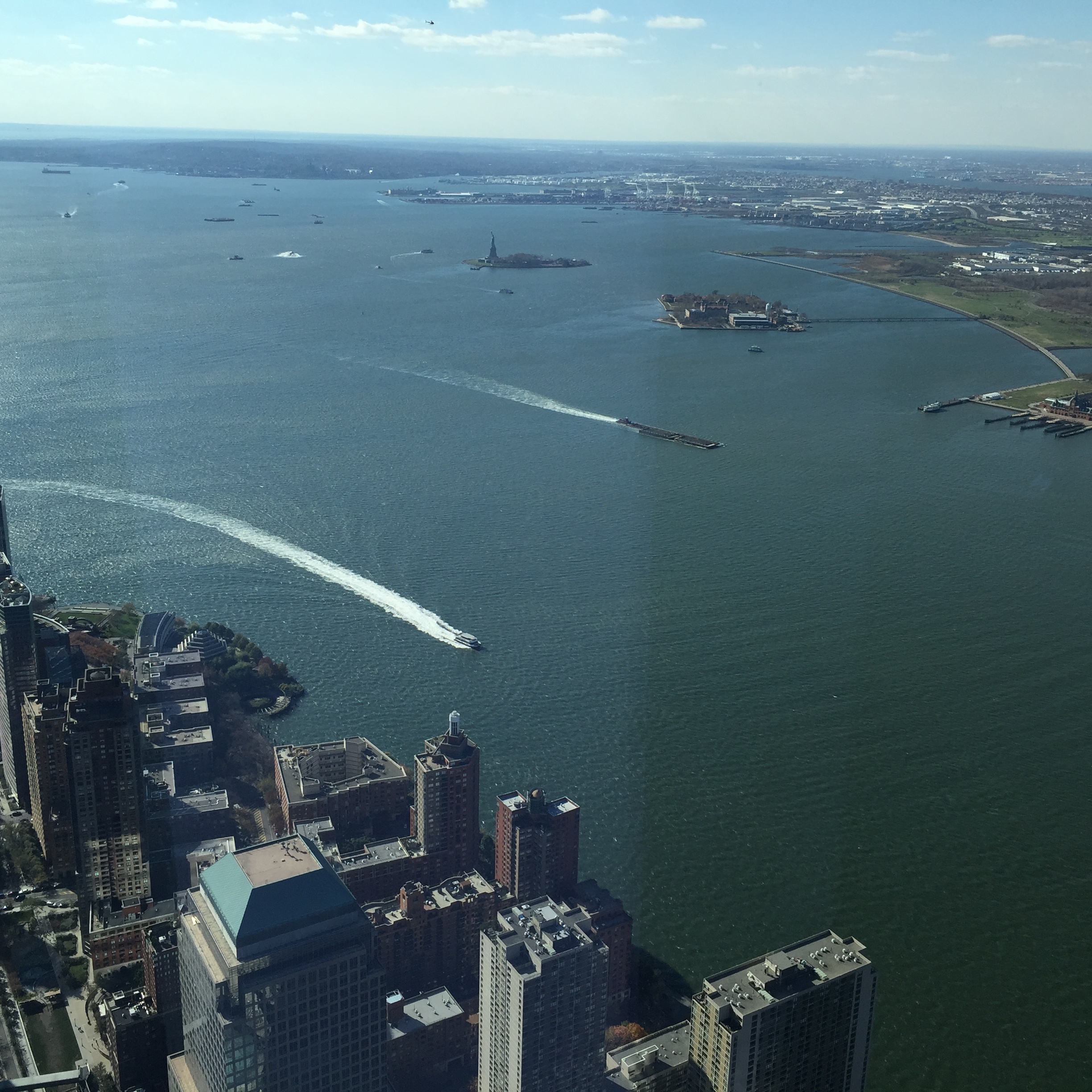 After I came down from the top, I went to the reflection pool that I just pointed out in one of the above pictures and stood for a while and “reflected.” On the left side of the picture in the back you can see the massive base of One World Trade Center where I just was. 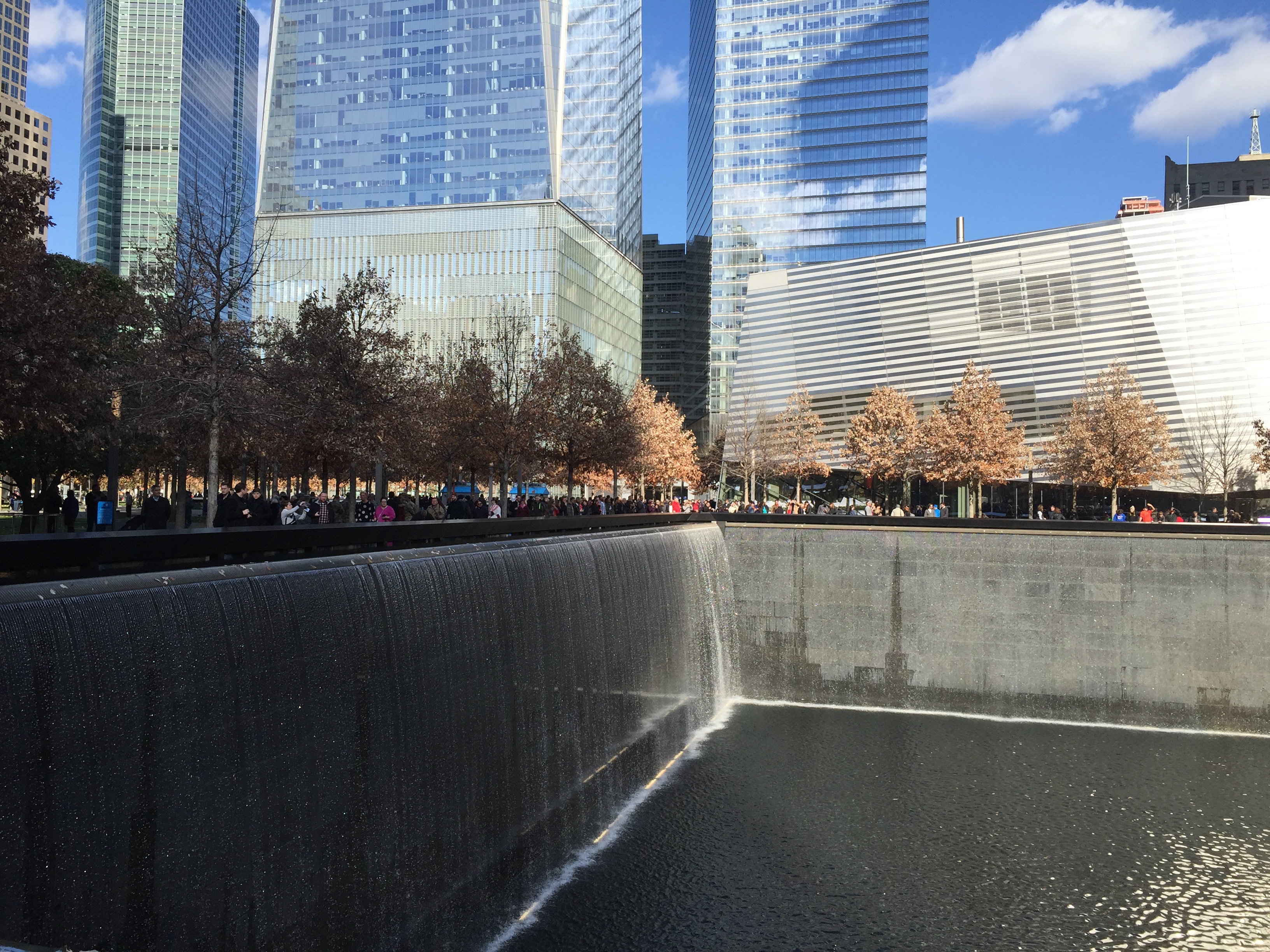 One last look up. I was just on the very top of that building, looking down and taking all these pictures. 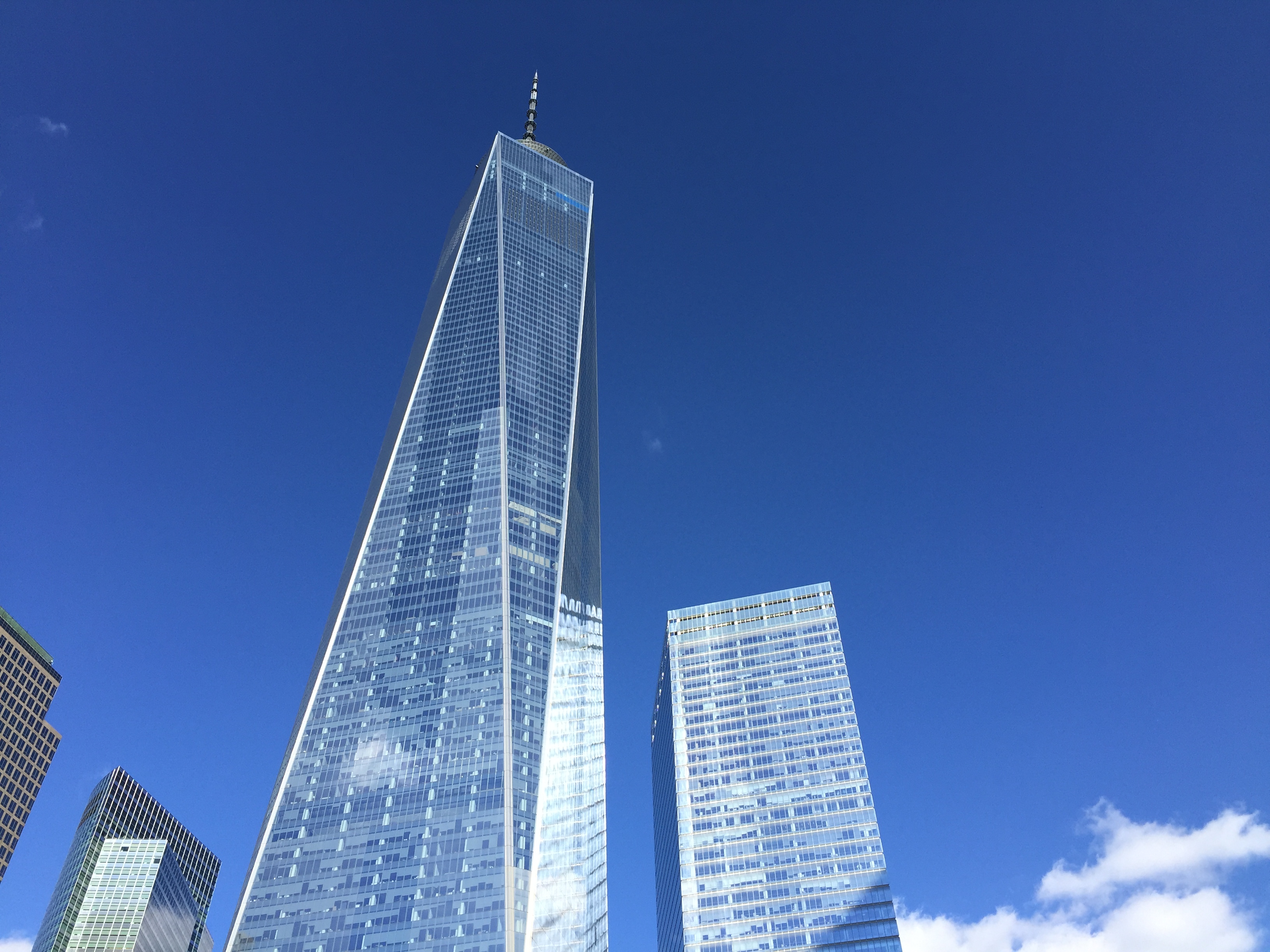 I can definitely recommend a visit to the World Trade Center. If you want to visit the museum, the observatory and spend some time reflecting, you had better plan on spending an entire day there. Or break it up into several different visits.