Here is a hilarious article about If Socialism is Evil, Does that make Israel Bad?

Bernie Sanders calls himself a socialist, and according to a Gallup poll listing groups of people, socialists are the least trusted group in the United States in this chart: 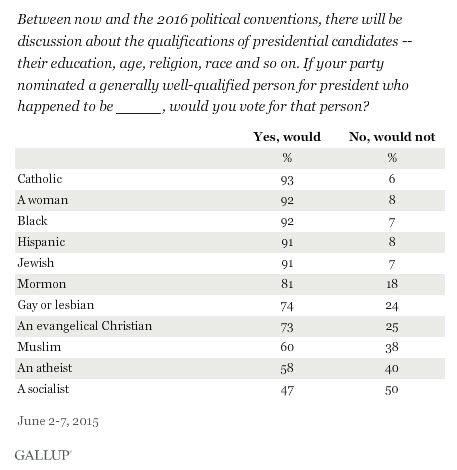 We have been brainwashed into thinking that socialism is evil, or abhorrent. Socialism is definitely un-American. Yet, we have a lot of allies that are socialist countries. Go to Sweden, Denmark, Germany and talk to the people on the streets. They are proud of their countries, the social system, and they cannot understand all the fuss in the United States.

They are baffled that we choose not to provide healthcare coverage to everyone. They are in disbelief that our public universities are not free to all that qualify to attend them based on merit. They don’t understand how we can live without at least five weeks of paid vacation per year. They are mystified about our attitudes toward paid maternity leave.

Israel is basically a socialist country. Yet we send billions of our tax dollars to them every year to prop it up. That does not seem to bother us.

There are pros and cons regarding both systems. I chose to spend my life as an American citizen, and I like our system over that of Germany, for instance. That does not mean I couldn’t think of things we might want to tweak and improve.

But one thing I am sure about: Socialism is not EVIL. It’s just different.

Now let’s watch Bernie Sanders not get elected [sarcasm]. Perhaps if he professed to atheism, he might have a better chance.

7 thoughts on “Ruminations About the S-Word (Socialism)”