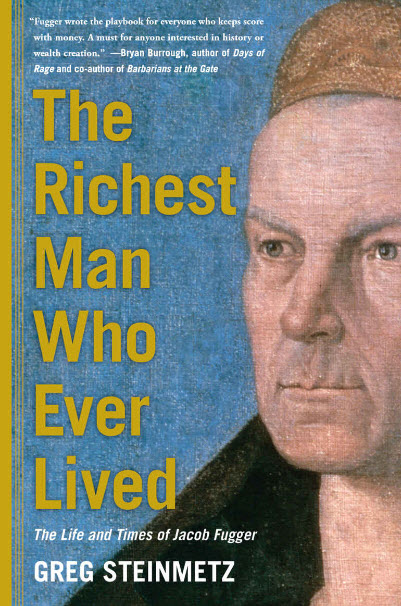 Jacob Fugger was born in 1459 in Augsburg, Germany and died 1525, at the age of 66. He single-handedly created a banking and trade empire that reached to all ends of the globe. His company was the largest commercial concern the world had ever seen. He was essentially the father of modern banking and finance, and the methods that he applied still are used in business today, including double-entry bookkeeping.

Fugger made his money initially as a trader of textiles. He then got into mining of copper, silver and mercury, and basically cornered the market on metals. He was a trader and a banker. And here is where it gets interesting: At a time when the Catholic Church forbid money lending for interest, calling the sin “usury,” he made a huge amount of his money by lending. Eventually he convinced the Pope to allow lending. He was also instrumental for funding the emperors of his day. The Habsburg emperor Maximilian I might never have been emperor without Fugger’s money. His grandson and successor, Charles V relied exclusively on Fugger to finance his election and then many of his wars. Charles was emperor (and king of Spain) during the time when gold from the Americas started flooding into Europe. Fugger had his hands on the gold by controlling the purses of the emperors.

Günter Ogger wrote a biography about Fugger titled Kauf dir einen Kaiser (buy yourself an emperor), which is part of Steinmetz’s bibliography in the book.

How does one compare very rich people to one another when they live in very different times? Some people compiled lists of assets, converted them to gold, and then valued them. Others compared the assets to the GNP of the times. This was the method Steinmetz used to measure Fugger and list him as the richest man who ever lived. When he died, supposedly his net worth was about 2 percent of the GNP of Europe, indeed a vast amount of money.

During Fugger’s time, he mostly traded in florins, the currency used by Florence, Italy, based on gold, and generally referred to as “pieces of gold” in literature. When the fairy tale writers the Brothers Grimm spoke of pieces of gold, they referred to florins. This book is full of references of florins. For instance, Fugger lent Charles V 544,000 florins to buy his election for emperor. So what is a florin?

I did a little research and found some rough numbers. A weaver (a skilled worker) in the year 1500 would earn one florin every 4 to 6 weeks. A mercenary might earn one or two florins a month. So let’s just average that and say that a florin is pay for a month for an average worker. That would make 12 florins a year an annual normal income. Let’s compare that to $50,000 in today’s America. That would make one florin worth $4166. Ok, let’s say $4000.

Given that, Fugger lent Charles V $2 billion – just to bribe the electors. This reminds me of what it costs to run for U.S. president today. Obviously, Fugger was Charles’ SuperPAC. Incidentally, it took Fugger years to get his money back from the Emperor. It’s pretty tricky when you loan money to a guy who is above the law and can just kill you if he so chooses. The only thing protecting Fugger from demise, over and over again, was that the royals knew quite well that they’d need his money in the future.

So maybe he was not the richest man who ever lived, but he was one of them. Here are a few lists that I found for comparison:

I am glad I didn’t read the negative Amazon reviews of this book before I read it myself. Some reviewers blasted the author for bad and clumsy writing. I usually don’t like clumsy writing, but I noticed none of it. The writing is simple, succinct, informative and easy to read. The stories are not chronological, but rather topical, so there are overlaps in the way the chapters flow through history. It worked fine for me.

I was delighted by how much I learned about the Renaissance. The period came alive in front of my eyes. How do you do international business without telephones, fax machines, the Internet, and travel other than walking or by coach. How do you survive when the church can just accuse you of heresy and burn you at the stake if they so choose? How do you trade when the roads are infested with highway robbers?

I found The Richest Man Who Ever Lived a highly readable and informative book that inspired me to find more material about history during that time.