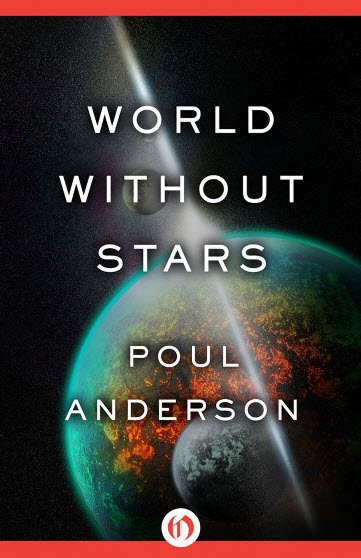 In the distant future, when starships are commonplace and can jump to any place in space instantaneously, and humans are virtually immortal, a starship captain takes a trip into intergalactic space. He wants to be the first to take up trading with an alien race that originated on a planet orbiting a red dwarf star 230,000 light-years away from our galaxy.

But the jump goes wrong and the ship crash-lands on another planet around that star. To have any chance to make it off the planet, they have to cooperate with the local intelligent races.

There are no stars in the sky in intergalactic space. The Milky Way, 230,000 light years distant, spans about 20 degrees in the sky and is considered a ‘god’ by the locals.

But as expected, communicating with aliens isn’t as simple as it sounds, and much can go wrong.

World Without Stars has thought-provoking concepts, like instantaneous starship travel – well almost instantaneous. The ship has to match relative velocities with the target area, generally a solar system. The velocities can be significant percentages of light speed, so attaining them takes time and energy.

Anderson, however, does not deal with the concept of relativistic space travel in this book. Rather, a good half of the story deals with esoteric and anthropomorphic concepts related to alien races, their own rivalries and their views of outsiders. In other words: alien politics. If found the intrigues boring very quickly. Yes, they were supposedly aliens, but reading the stuff seemed like we were dealing with Neolithic humans and their petty squabbles with each other. I ended up skimming over many chapters. I don’t think I missed anything.

I wanted to find out how they would eventually get off the forsaken planet. Unfortunately, a deus ex machina came and bailed them out, and then the book was over.

Not Anderson’s best, not at all.