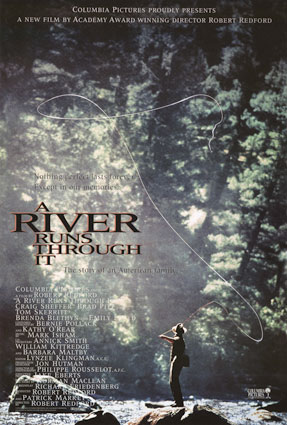 For a week now we have stayed at a lodge home in rural Montana. In front of a huge stone fireplace sixteen feet high, under giant barn beams that make up the ceiling, on a comfortable couch, the stars bright outside in the vast Montana sky, we watched the movie A River Runs Through It.

It tells the story of two brothers, Norman (Craig Sheffer) and Paul (Brad Pitt), the sons of a Presbyterian minister (Tom Skerritt), following their lives from early childhood in Montana in the early 20th century through their younger years into adulthood.

Norman tells the story from his point of view. He is the son that goes off to college and later becomes a college professor. Paul, his hard-living younger brother stays in Montana where he works as a newspaper reporter. The father and the brothers are as different as can be, except for their love of fly fishing. The river ties them all together.

Directed by Robert Redford and based on an autobiographical book by Norman MacLean, A River Runs Through It tells a family epic and makes us think of what in life really matters.