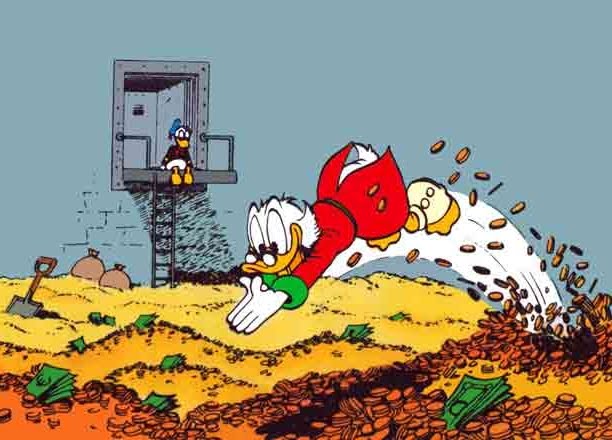 Based on this list at PayScale.com, the CEOs of the large corporations make salaries of 83 times as much as the average employee in their companies.

So, if the average employee makes $60k a year, the CEO makes about $5 million a year. I hate to say this, but if you “only” make $5 million a year, you’re not going to become a billionaire. Billionaires are not where they are because they live frugally, save their money, and get regular raises. If you make $5 million, as the average CEO of a large company in this list makes, you have to spend nothing and save all your salary for 200 years to become a billionaire.

So bringing up CEO salaries, and how they compare to average workers, does not make sense when talking about billionaires. To become a billionaire, you either have to inherit a lot of money (like the Walton clan did), or, as it is the case with most billionaires, you have to create a very unique and highly successful company, make it take off, make it grow, and then either sell it, or take it public. It’s not easily done, and it won’t happen if you’re mostly interested in a paycheck. I just wrote a post about some prominent billionaires and what I think about Bernie Sanders’ comments about them here.

I don’t know what exactly Sanders wants to do about this problem of CEOs making more money than average workers. Do they deserve it? I don’t know. It’s the jobs of the boards that put the CEOs in place to decide, not mine, not Sanders’, and not the government’s. The government cannot dictate to companies what they pay their employees, within some limits. Yes, there are minimum wages, and I have outlined what I think about minimum wages here. But there are no maximum wages.

The only thing the government can do is tax. I agree with most people: taxation should be fair. I do not believe that a CEO should pay less taxes than his secretary. Why is the tax code so complicated?

But here is the rub: Many low-income people pay no taxes at all. Why? Churches are tax exempt? Why in the world do we allow that? The government should make up its mind how much money it has to extract out of the people in income taxes as a percentage. Then the tax code, which everyone says is so complicated, gets really simple:

For those that believe it’s not fair that CEOs make millions of dollars I simply say that: Just become a CEO. Then you can make that kind of money. Get the education that it takes. Start with an entry-level job, preferably in the sales department and work your way up. When the CEO job opens, apply for it and get it. You can then earn the big bucks.

Well, there you have it. That’s the difference between being the CEO and flipping burgers.