A derivative object that retains ornamental design cues to a structure that was necessary in the original, even when not functionally necessary.

Many common skeuomorphs were introduced by Apple due to a propensity by Steve Jobs for those mechanisms. For instance, the shutter-click sound emitted by many camera phones when taking a picture is an auditory skeuomorph. There really isn’t anything clicking, it’s just a sound it makes to make you feel like there is.

Another example in our house are the plastic Adirondack chairs in the back yard. The chairs imitate the design of the wooden Adirondack construction, but for no reason other than look like those.

The last coffee machine we bought employs a skeuomorph for the timer, but is has a number of annoying features of what I would call Crappy Design. 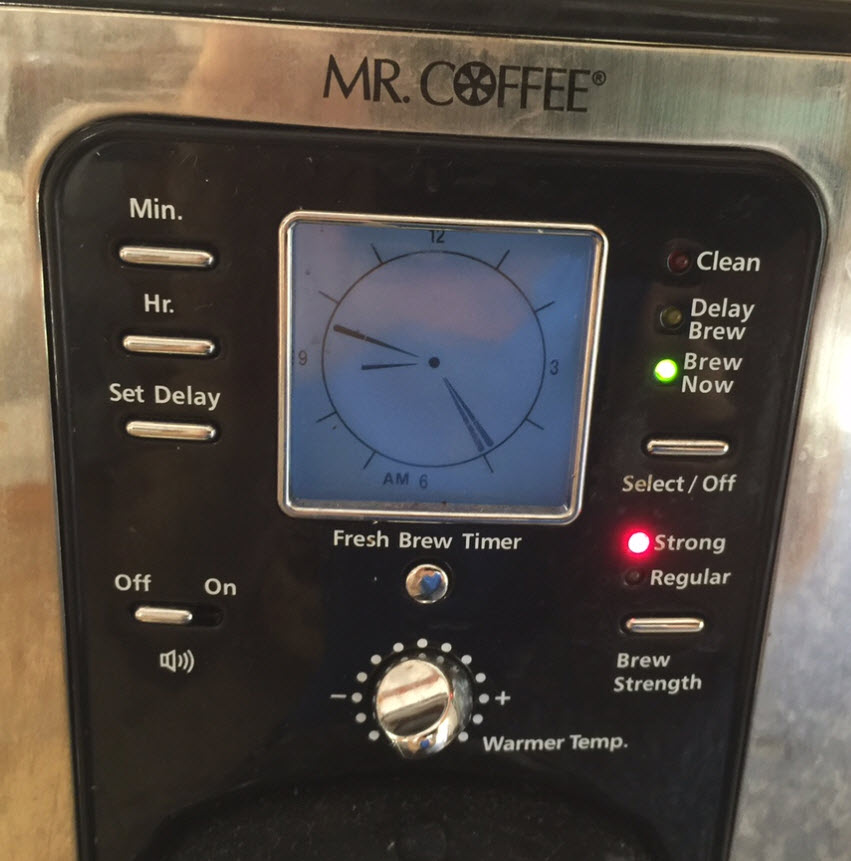 For instance, the knob labeled “Warmer Temp.” Why does it say Temp. only? Could they have not written Temperature? Then there is the knob itself. It’s a bidirectional knob. You can’t tell where the indicator is, and to make it worse, it turns round and round. There is no stop. So how exactly do you make it warmer or cooler?

Then on the left side there is the icon for a Sound, I guess. Where everything else is labeled with words, apparently here they could not write Beep or Sound, they had to apply this icon. Above it is a switch to turn the sound off, which does not work. The thing beeps no matter which side this switch is on, and it has done so out of the box.

Finally there is the skeuomorph – the clock. It’s a bright digital screen that shines a beacon through the kitchen in the dark, brighter than a nightlight. There is no way to turn it off. It shows a clock, with all three clock hands moving like an analog clock would. But the display is small enough that I really can’t see the time very well. We already have a clock in the kitchen, so I don’t really need another one provided by my coffee machine.

Then, to set the timer, you have to use the Min., Hr. and Set Delay buttons on the left. These are so unintuitive, I can never figure out how to use them, and so I don’t. When you hit the Min. (why not call it Minute?) button, the minute hand on the clock jumps a minute. When you hit the Hr. (why not call it Hour?) button, the hour hand jumps an hour. They obviously want to be cute with the clock, but skeuomorphism is supposed to make things intuitive. But what analog clock does this when you hit forward buttons? Those buttons were introduced when digital alarm clocks first came into being, to forward the displays.

So there you have it. I introduced the word skeuomorph (didn’t you need to know that?), and I gave you an example of truly Crappy Design by Mr. Coffee.

3 thoughts on “The Dumbest Skeuomorph – Our Coffee Machine Timer”