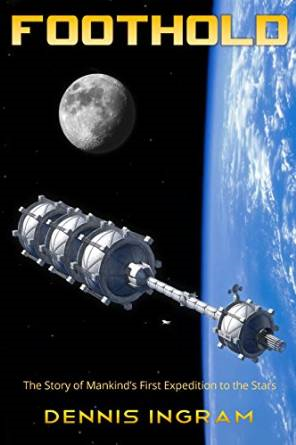 It’s 2063, and Earth is headed for runaway global warming. The Hope is the first starship built by mankind to travel to Tau Ceti, a star 12 light years away, where astronomers have found several candidates of planets that could support human life. Eight humans are on board the ship, four couples, carefully selected by the international community for their educational background, their genetic makeup, and their psychological profiles to go on a one-way journey to Tau Ceti to start the first ever human colony in another star system.

The Hope is a spaceship designed for this trip. It can reach a speed of 40% of the speed of light and this make the trip in about 40 years. A technology called stasis was invented to basically freeze time to a standstill in phone-booth sized devices, where the humans on board can remain while the automated ship completes the journey.

That is if nothing goes wrong.

The first half of the book is about the journey, and the second about the colonization of the planet they end up finding. Interwoven into the story is Earth history and the rapid degradation into global disaster brought on by runaway global warming. There is a sinister part of the story where a tycoon on Earth essentially hijacks the next star ship for his own imperial plans.

As I read Foothold, I could not figure out why the tycoon story was part of the plot, until I got to the end where I learned that the plot isn’t getting resolved but the whole thing is a setup for a sequel.

The sequel notwithstanding, Foothold is a good, riveting sci-fi read. It kept me turning the pages. However, there were a few things about the book that bothered me:

The technology, for being only 50 years in the future, was just too unbelievable. Fabricators, which are basically 3-D printers into which you just have to feed raw materials (iron ore, etc.) just didn’t make sense to me. The fabricators were able to build robots that could autonomously build habitats, launch mining operations, and the like. The statis chambers, while a neat trick in themselves, just seemed too convenient. Most of the technology just seemed too deus-ex-machina-like to strike me as feasible within the next 50 years. The eight human protagonists also seemed too much like super people to seem real.

Finally, unfortunately as it is common with self-published authors, grammar errors abounded, particularly in the second half of the book. I appreciate that the authors do this all themselves. Don’t they have a friend or two who can read their books before they publish them to get the gross grammatical errors taken care of? I am sure I found at least 50 sentences that just didn’t make sense. The author should eliminate those obvious errors before he asks readers to pay money for his book.

I enjoyed Foothold, but not enough to want to spend the time to read the sequel The Seasoning.