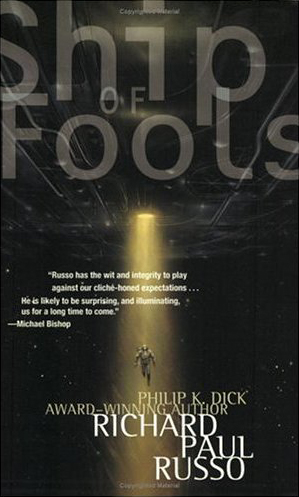 For many centuries, the starship Argonos, with thousands of people on board, has traveled between the stars looking for a planet to colonize. None has worked out. They never once encountered any alien civilization. About 275 years ago, there was a revolution on board which ultimately upset the balance of power and also destroyed the logs and records of the ship. Nobody knows how old the ship is, how long it has traveled, and where it has been.

Its society has fractured into the downsiders, those people born and living in the lower decks of the ship, where farming and labor takes place, and the upsiders, who are the crew, the educated and the religious elites. The Catholic church is strong and thriving. There is even a cathedral on board.

For the first time in recent memory, they find a planet that looks promising. They land to explore it, and in the process find a gruesome and shocking surprise. Eventually, a transmission from the planet into space leads the Argonos to an alien ship in deep space. They explore and find disconcerting evidence of what many call evil.

Bartolomeo Aguilera is the narrator of the story. He is the confidant of the captain of the Argonos, but an outsider in general, disliked by the elite as well as the workers. Through his narration we learn about the realities of life on the ship, where everyone on board was born on board and has lived their entire lives on board. They know no other life. The church teaches that the ship has existed forever.

I loved the first half of Ship of Fools. The story of the lives of the inhabitants is engaging and thought-provoking. I didn’t care much for the endless sections of religious exposition. The bishop of the Argonos and one of its priests are major protagonists, and their points of view and dialog keeps drawing the story into religious confusion and anachronisms.

When the ship reaches the alien vessel, the story becomes boring and pointless, and the climax really never gets resolved. There are two threads to the ending, and neither is completed. Perhaps the author wanted to set us up for a sequel. This was written in 2001, and it’s now 2015, and there isn’t one.

I had this book at three stars or above, until the second half just took a nosedive and left everything just – uninteresting.

Nevertheless, for lovers of generation ship stories, it is still a must-read.