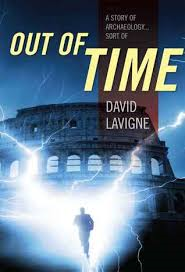 John Campbell is a college professor of archeology. He lives alone, is disenchanted with his life and does not have much respect for most of his students. One of his pastimes is treasure hunting at yard sales and flea markets. He finds an old desk for fifty dollars. When he takes it home to clean it up, he finds some locked drawers and compartments that he can only access by taking the desk apart. It turns out, the desk used to belong to Nikolai Tesla, one of the geniuses of the 19th century. It contains many notebooks, designs and a handheld device that turns out to be a time machine.

The curiosity of the archeologist leads Campbell to visit ancient Rome first, but he also ventures to colonial America during the time of the revolution, and to Germany during the Nazi period. He discovers that a Nazi named Hans Richter also has a time machine, and he seems to have dedicated himself to changing world history so the result is that the United States of America never exist and the Nazis ended up undefeated in World War II. Campbell decides to make it his mission to stop Richter.

I love time travel stories, and this one is based on an interesting premise and a fairly exciting plot. This kept me turning the pages. I wanted to know how it would all end.

However, the writing is juvenile. The book is full of clichés and it feels like it’s written by a high school sophomore. For example, when they were in ancient Rome they “hit the taverns.” Whenever they had meals, they “washed the food down” with wine or beer. Or: “Mary was used to luxury, but this was over the top.”

The characters are not credible. The author seems to know very little about archeology. I don’t understand why he made the protagonist an archeologist. He could have been a car mechanic, a hairdresser, or a computer programmer. He is just not credible as an archeologist. Also, I could never accept that Campbell is able to speak fluent ancient Greek and Latin within just a few days of acclimating. In general, the main characters are all shallow cardboard figures doing things that don’t seem real or even possible.

The grammar, punctuation, sentence structure and spelling are atrocious. It feels like there isn’t a page where there isn’t something wrong. The author does not seem to know the difference between “threw” and “through,” “there” and “their,” “your” and “you’re,” and many other such pairs. Many sentences have missing words and sometimes the structure is so jumbled, it’s impossible to figure out what he author is trying to say. He also has trouble with plurals. For instance, he keeps writing “Nazi’s” to indicate more than one of them. The whole book reads like a hastily written first draft.

The author obviously never proof-read his own book, and he didn’t bother to ask anyone else. It does not take an expensive professional editor to find 95% of the errors. The book has some 200 pages, and I believe I could easily find 200 corrections in a casual read. With another couple of days of reading and editing his own work he could have made a huge difference in the quality of the book. As it is, the errors are distracting from the story. I only paid 99 cents for the book on Amazon, but I still feel cheated. I expected a finished work, not a first draft.

Overall, Out of Time is a neat idea for a story, but it’s so poorly done, it’s distracting. The book is simply not finished. I don’t think I’ll read any more LaVigne novels.

One thought on “Book Review: Out of Time: A story of archeology…sort of – by David LaVigne”