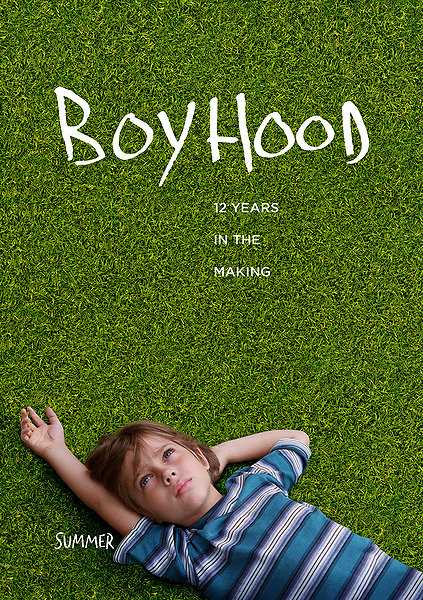 Mason (Ellar Coltrane) is about six years old when the story starts, around 2002. His sister Samantha (Lorelei Linklater) is a year or two older. They are being raised by their mom (Patricia Ardette), who is barely able to make ends meet, financially and emotionally. Their “out of the picture dad” (Ethan Hawke) swoops in from time to time and takes the kids out. They love being with him.

Boyhood is the ultimate coming of age story. It’s a movie about nothing, just growing up. We watch Mason and his sister cope with their mom’s antics and life changes. She falls in love with her professor. They get married. She and the kids move in with him and the kids, but Brady Bunch it is not. He turns out to be an abusive alcoholic, and one day they all just walk away, with only the clothes they are wearing. The next boyfriend does not work out much better.

Mason and Sam are dragged away from their familiar surroundings, and schools, again and again. They have no stable homes, no security and no apparent plans. They grow up – just like millions of American kids in the new millennium.

Ironically, the guy portrayed as the wayward, absent father, their dad, is the best, most stable and healthiest influence on the kids, while their mom in her neurotic fog, and her men, and her friends, and her relatives are all mostly messing with the kids’ heads, even though they think they are helping. Does this sound like Thanksgiving day with the family?

Boyhood goes on for two hours and 45 minutes, telling the story, like a string of home movies. Which in a way it is. Linklater filmed this movie over a period of 12 years, and we literally see the kids grow from elementary schoolers into college in front of our eyes. Unlike movies where there is a Mason as a small boy, and another actor for Mason as a teenager, and another one as a college student, the same actor plays the boy as he grows up. It’s the same with Sam, who happens to be Linklater’s real-life daughter. This gives the film a sense of reality unlike any other movie I can think of, with the only exception perhaps of 7 Up and the Up Series that followed.