Think of all the hate there is in Red China
Then take a look around to Selma, Alabama
You may leave here for four days in space
But when you return it’s the same old place
The pounding of the drums, the pride and disgrace
You can bury your dead but don’t leave a trace
Hate your next door neighbor but don’t forget to say grace 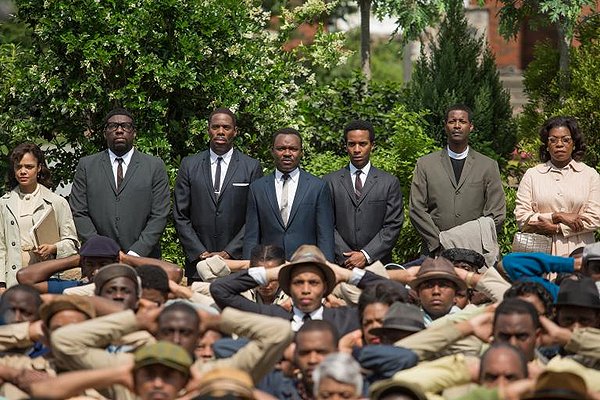 Selma tells the story that every American should know by heart. But most of us only know: “It has something to do with black people and Martin Luther King.”

After watching Selma, the images of hate, repression, brutality by white supremacists against blacks, injustice and twisted views of the rights of people will forever remain etched into the minds and memories of the viewer.

During a dangerous and turbulent three-month period in 1965, Martin Luther King led a campaign to secure equal voting rights for blacks. The white power structure, even though only 50% of the population in the south, wasn’t having any of it, and thugs blew up churches killing 14-year-old girls, and attacked unarmed and peaceful protestors with baseball bats wrapped in barbed wire. The police stood by and turned the other way, or worse, charged the crowds in riot gear and beat helpless people with batons, whipping them, and kicking them in their backs as they fled. The opposition of the establishment was violent.

The movie takes us there with Dr. Martin Luther King Jr. (David Oyelowo) when he stands up to President Johnson (Tom Wilkonson) in the Oval Office, holding firm in his demand. We are there when the epic march from Selma to Montgomery resulted in one of the most significant victories for the civil rights movement, the Voting Rights Act of 1965.

As I watched, I marveled how so many people, only 50 years ago, could be so blatantly prejudiced and discriminating, while they pledge every day

one nation, under God, with liberty and justice for all…

Selma is a 2 hour and 7 minute movie with a powerful thought in every minute. I often disparage religion, but in this film, religious imagery created the most powerful moment of all for me: It was when King called on clergy from all over the country to join him in the march in Selma, and there they were, all types of creeds and denomination, shoulder to shoulder, on the bridge, standing and facing police in riot gear. When the police backed down, King led them all in prayer.

Belief is a powerful thing.

Selma took a lot out of me to watch, but it will stand out as one of the very best movies I have seen in years.