War is the game played by old men with the lives of the young. 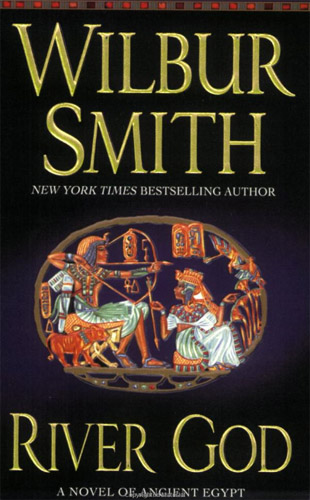 River God is set in Ancient Egypt, some time during the speculative 13th or 14th dynasty, or roughly between 1700 to 1500 BC. Egyptologists call the era the Second Intermediate Period which followed the Middle Kingdom. Even though that time is about 3700 years ago for us, the Egyptians of the time already thought of themselves as an ancient people. Note that the Great Pyramid of Cheops in Giza was already almost 1000 years old then. To them, that was ancient, ancient antiquity.

The story is told in the first person by a slave and eunuch. Taita, the slave, happens to be brilliant and talented. He knows medicine, architecture, writing, city planning, engineering and many other skills. Such a slave is worth his weight in gold many times over, literally, and rich people will do anything to possess and retain such a slave for themselves.

Taita, therefore, has access to the most powerful people in the empire, and through his eyes we get a first-hand view of the machinations of power in ancient Egypt. The politics, the intrigues, and the sheer struggle for survival, not just for the working class, but also for royalty, comes to life in brilliant colors.

The story is well conceived and plays against a historical background, even though the actual players and their names and individual stories are fictional, yet entirely credible and plausible.

Written in 1994 and filling 662 pages, the story is loosely historically accurate. I am sure it’s not enough for an Egyptologist, but for a novice in ancient history, it serves as a great introduction to a mysterious world far, far away from us, yet, one that lasted many thousands of years longer and our own modern American civilization thus far.