When we look up at night in the city, if we’re not under a street light, we see a few stars. If you have ever been out in the desert at night, it seems like there are a million stars. In reality, we can only see about 4,000 to 6,000 stars with the naked eye.

Furthermore, those stars are all located pretty close to our solar neighborhood. Some are just a few light years, or tens of light years away.

Here is a diagram of the 50 stars closest to us, all of them within four to 16 light years. Interestingly, only nine of those stars are bright enough to be seen with the naked eye.

Here is another chart showing major stars within 50 light years. There are about 2,000 stars within that distance.

Some very popular recognizable stars are in the Orion constellation.

In the Orion, there are the four main stars forming the outer rectangle and three main stars in the belt.

The galaxy shown in the picture below is similar to our Milky Way, at least for the sake of this mind exercise. Please notice the little circle at the tip of the red arrow. 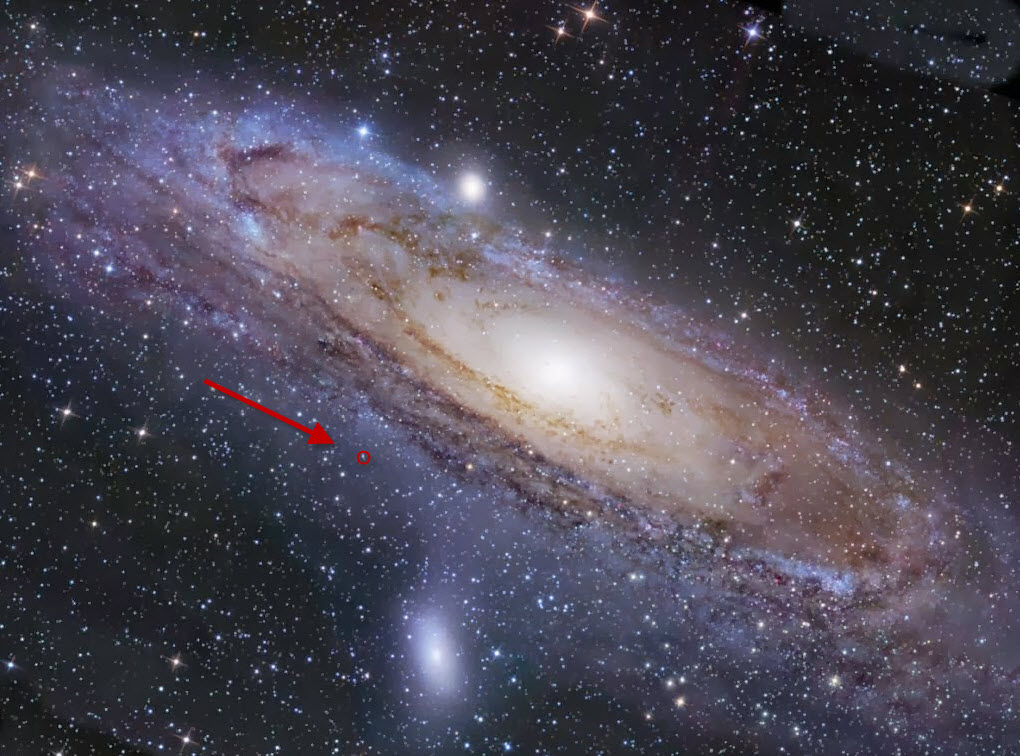 Our sun is about 28,000 light years from the center of our galaxy. If you enlarge the picture, you’ll see a little circle at the end of the arrow. That’s approximately the sun would be with respect to the center of such a galaxy, and the bubble encircles the area of all the stars we can see with our naked eye on Earth. If you go outside right now and look up in the night sky, every star you see is actually in this little red circle. That’s how far we can see. That’s the “approximately 1,000 light year bubble.”

The point is, we can’t see very far.

In recent years, scientists at Caltech have come to the conclusion that half of all stars in the universe may be “rogue stars” which are stars that float outside of the major galaxies in the vast open spaces between. Such stars don’t have any neighbors, so there would be nothing in their 1,000 light year bubble. If we lived on a planet on such a star, there would be nothing in the night sky. No stars at all. Only endless blackness, and some “smudges” of light if there were any close-by galaxies. I wonder what psyche such a civilization would develop if the only celestial objects were moons (if any), planets (if any) and the occasional comets? Their entire mythology would be very different from ours.

On the other hand, if our sun were close to the center of the galaxy, where stars are packed tightly, our night sky would be glowing bright with light. We probably wouldn’t think of it as a night sky. It would just be somewhat less bright during the “night” phase of our days, when the sun was below the horizon. That, too, would have created a very different mythology.

So it turns out, night skies are not the same everywhere.

2 thoughts on “Musings about the Night Sky”