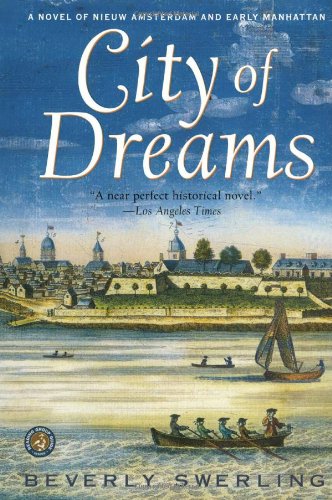 In the 1660s, Nieuw Amsterdam was a rough and primitive settlement of a fort and a few houses on the southern tip of Manhattan Island.

Here is what the settlement looked like in 1664, a view looking north toward the tip of Manhattan.

In 1625, when the town was founded, there were only 270 people who lived there. The population may have grown to a couple of thousand by 1661, when our story starts with Lucas and Sally Turner, who stumbled off their small wooden ship onto the island. They had spent eleven brutal and utterly exhausting weeks at sea. Peter Stuyvesant, the colony’s director-general, ruled the settlement with an iron fist.

Lucas Turner was a barber and a surgeon. As luck would have it, Stuyvesant was gravely ill due to kidney stones just as Lucas arrived, the only person in the colony that knew how to help. This put him in the favor of the director-general and gave him and his sister a start. Sally Turner was smart with herbs and started an apothecary.

Soon the hardships of the colony got the better of the siblings, and they eventually became enemies. Both founded their own families. Sally’s descendants were the Devreys, Lucas’ were the Turners.

The novel follows the generations of families through almost 140 years, up to 1798. The story reminds me of Rutherfurd’s book New York, which also begins in 1664 and leads the reader through 2001. Like Rutherfurd did, Swerling takes us through the lives of the people in the period. We literally find ourselves surrounded by disease, suffering, hunger, despair, and the human reaction to all these challenges, as we follow the characters through their lives.

I love historical novels. I cannot resist them. Especially those about New York. Pete Hamill, Edward Rutherfurd, and now Beverly Swerling all have their own style. Swerling does not shy away from sex and lust, and she has a peculiar penchant for description of filth and disease.

Regardless of all the gross parts, I loved every minute of it. If you want to learn about life in the 1700s, if you are looking for a human story that is situated during the time of the American Revolution, City of Dreams is a great book to read.

One thought on “Book Review: City of Dreams: A Novel of Early Manhattan – by Beverly Swerling”