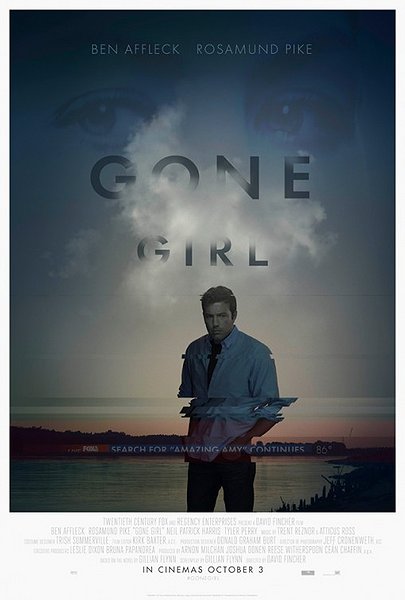 They lead a life of professionals in the City and all seems well until they move to Missouri to assist Nick’s dying mother. Amy didn’t really want to do this, and it seems to her that Nick just wants to be with his buddies in his small home town to cover up his inadequacies. He lost his job as a journalist.

On the day of their fifth wedding anniversary Amy disappears under mysterious circumstances. The police starts working on the missing person case, and the entire town rallies behind Nick, until one small clue after the other, it starts looking like Nick might have killed Amy.

As we watch both of them in flashbacks leading up to the event of the anniversary and Amy’s disappearance, we find that the marriage wasn’t quite what we think it was. On the contrary, what were the two of them doing to each other?

Gone Girl is a mystery thriller through and through. It’s 2 hours and 25 minutes long, and it seems much longer, not because it’s boring, but because it’s so riveting and entertaining and there is so much action, suspense and surprise packed into it.

The movie is full of immense plot twists, a few sex scenes, and crazy bad-ass violence. But what do you expect when you watch a good old crime flick?

The movie was highly entertaining, and at times almost shocking to watch. I chuckled, I gasped, I laughed, and I cringed.

Then I walked out very satisfied. It was a well-crafted masterfully-done movie.