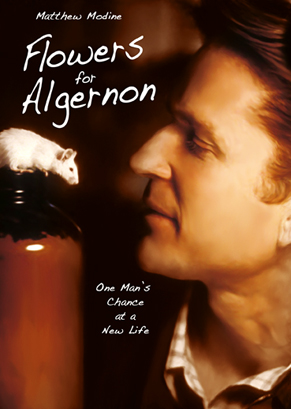 Charlie Gordon is a thirty-two year old retarded man with an IQ of 68. He works as a janitor at a bakery, and he participates in studies about cognition at a local university. He also learns to read and write. At the university, two prominent scientists have performed an experimental brain surgery on a mouse named Algernon designed to raise the intelligence. The performance of Algernon exceeds all expectations and he solves mazes quickly and with astonishing intuition.

Due to his good nature and positive spirit, Charlie is selected as the first human to undergo the experimental surgery. Within weeks of the surgery, Charlie finds himself becoming first average in IQ and eventually he surpasses even his mentors, professors and psychiatrist. At the peak, his IQ is 185, which is one in many millions. He is one of the brightest minds in the world.

When the scientists discover strange behavior in Algernon, they suspect there might be something about this effect that makes it only temporary. They can’t find the answer, so Charlie picks up the research himself and eventually discovers the truth.

The entire book is written as a series of “progress reports” by Charlie, starting with his IQ of 68 and the very simple-minded point of view of a retarded person. Eventually, his language develops and his reasoning becomes ever more complex. Charlie quickly realizes that intelligence can be gained quickly, but emotional maturity takes some time to learn. This makes him a genius with the psyche of an adolescent child.

Flowers for Algernon was published in 1959. There are several movie adaptations I had never heard about but may be curious to seek out now that I know the story.

There are some chilling parallels to the famous 1990 movie Awakenings with Robert de Niro and Robin Williams. Flowers for Algernon kept me engaged and occupied. Matters of the brain, cognition and how our identities relate to and are dependent on the biochemical reality of our bodies has always keenly interested me. I may think about intelligence never quite the same way again.

One thought on “Book Review: Flowers for Algernon – by Daniel Keyes”