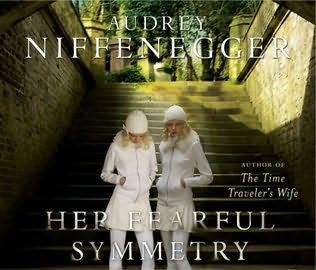 As a blogger who had reviewed Audrey’s first book, I had the privilege of getting an advance reader’s edition of her second major novel – Her Fearful Symmetry. I loved The Time Traveler’s Wife and as fate would have it, today was a Niffenegger day. At about 12:30pm I finished reading Her Fearful Symmetry, and at 2:30pm I was in the movie theater watching The Time Traveler’s Wife, the movie. I will review that next.

Audrey Niffenegger has a gift of picking an unusual premise, something off the wall, like time travel, and throw it at ordinary people with ordinary circumstances that we can all identify with and make it work in a story. Once you accept the possibility of time travel, no matter how remote or improbable that is, and you agree to put some arbitrary limitations around it, then the rest of the story works.

So it is with Her Fearful Symmetry. It is essentially a ghost story. Without giving anything away I can tell you there are ghosts, and the things the ghosts can do (and can’t do) and the effects the ghosts have on us mortals, are about what you’d expect. There is some good-natured haunting going on in this story. After you accept that there are ghosts, and you throw them in with ordinary characters, you have yourself a story, or do you?

The problem with this story is that the characters are not ordinary. There isn’t a character in the story that you’ll be able to identify with, not one. First, there are two identical twins, Edie and Elspeth, who grew up inseparably in England and then had a tragic and lifelong falling out, Edie moving to Chicago with her husband Jack, Elspeth staying in London. Then there are two more identical twins, Julia and Valentina, Edie and Jack’s daughters, who are carefree American teenagers in Chicago when the story starts. In London, there are Martin, an extreme obsessive compulsive crossword puzzle designer and exotic language translator, and his wife Marijke, also a polyglot, both with a peculiar set of problems. There is Robert, Elspeth’s eccentric lover and a historian studying cemeteries. When Elspeth dies from cancer, the American teenagers inherit her estate, but only if they live in her apartment for a year, along with a set of additional incomprehensible strings attached.

In a novel, characters have to be extreme and colorful to be interesting. But in this novel, the characters are so colorful, I couldn’t get the sense that they were real. Have you watched the movie “The Mask” with Jim Carrey? The masked character is a human, with a green head, and completely exaggerated acting and dialog, a human cartoon. As I read this novel, Martin, Marijke, Elspeth, Edie, Robert, Valentina and Julia were all cartoon characters to me like The Mask, with exaggerated actions, huge foibles, unreal handicaps and driven to implausible actions. Reading through 400 pages I never felt part of the story. I felt like I was watching a cartoon with all the colors, the soundtrack and the improbable action. It was never real.

Her Fearful Symmetry is broken down into three parts, each about a third of the book.

During the first part I had to force myself to keep reading. If I had not received the advance reader’s edition and given my implied commitment to read the book, I might have put it away and filed under Books, not finished reading. During the first part, the book did not keep my attention, probably because the author was busy introducing the characters to set up the story, but there was not one character in the book that I could identify with, that was not cartoonish, that I wanted to get to know further. I kept asking myself where the action was. Nothing much was happening, except the characters feeding off their own weirdness.

In the second part of the book we get introduced to the ghost in the story. This was more interesting, since it was the unusual premise that I started talking about earlier. Ok, a ghost, let’s see what’s up with that. I started turning the pages, wondering what the ghost would eventually do and how it would fit in.

The action happens in the third part of the book. The ghost gets really involved. I enjoyed the third part and I was glad I lasted through the first and second to get there. The plot was so far-fetched, albeit ghostly, that like the characters, it almost seemed cartoonish by then. But nonetheless, the twists of the plot were well crafted, with a little bit macabre, a little bit of ghoolishness, and some sick twin hangups sprinkled in to add to the surprises. The last hundred pages went by quickly and I loved the story.

Her Fearful Symmetry, while all Niffenegger, is not in the same league as her first book. I called her first book delightful. This was not delightful, but it was entertaining. Shall I say “cute?”

I can’t help it, but I need to say it: It will work well as a screenplay and somehow it seems that the author might have had this in mind when she wrote this book in the first place. It’s got to work as a movie.

I am looking forward to going to the movies in 2013 or so to see Her Fearful Symmetry. I’ll write another review then.

One thought on “Book Review: Her Fearful Symmetry – by Audrey Niffenegger”