I left today’s Colts game because President Donald J. Trump and I will not dignify any event that disrespects our soldiers, our Flag, or our National Anthem. At a time when so many Americans are inspiring our nation with their courage, resolve, and resilience, now, more than ever, we should rally around our Flag and everything that unites us. While everyone is entitled to their own opinions, I don’t think it’s too much to ask NFL players to respect the Flag and our National Anthem. I stand with President Trump, I stand with our soldiers, and I will always stand for our Flag and our National Anthem.

According to a staffer, Pence had planned on leaving the game early all along. It turns out he had diverted his west coast swing just to attend the game and leave early. Trump admits he told Pence to do just that. The whole thing, including the picture above, was a publicity stunt.

So much for our government, the reality show.

Now my take on this NFL protest and all the fuss about it:

I agree, we should rally around our country and unify it. That starts with leadership. Our leaders should show us how it is done. We’re getting the opposite of such leadership with this administration.

When an NFL player kneels for the National Anthem, he is openly showing his protest and making a statement — free speech.

I do not believe for a minute that those players actually “disrespect the flag or the anthem.” The flag and the anthem are symbols of our nation, just like kneeling is a symbol of protest. The players are protesting exactly BECAUSE they feel there is something wrong with the unity in our nation. Trump and Pence have it backwards.

The showmen running our country are using cheap propaganda techniques to distract us from their self-enrichment schemes by vilifying sports figures and appealing to our sense of patriotism using twisted messages and outright lies.

That, my friends, is the disgrace here.

I ask our so-called leaders to show us what it means to respect our country, its laws, its citizens, their rights, and the country’s symbols. 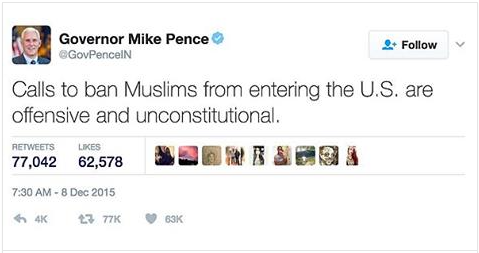 Calls to ban Muslims from entering the U.S. are offensive and unconstitutional.

During his public career, Pence has been an outspoken opponent of equal rights for lesbian, gay, bisexual and transgender citizens. In Congress, he opposed efforts to encourage foreign governments to decriminalize homosexuality and sought to block the repeal of the military’s “don’t ask, don’t tell” policy. As a governor, he stood against not only marriage equality, but civil unions as well. He also opposed a law prohibiting discrimination against LGBT people in the workplace and signed one opening the door to wide-ranging discrimination against these residents of his own state under the guise of religious liberty.

What causes a politician to do things like that? Why would you go out of your way to actively take away rights of fellow citizens? Ok, he obviously doesn’t like homosexual people.

This country is founded on the principles of equal rights for all. Some people are gay, some are black, some are atheist, some speak Spanish, some are Muslim, some are short, some are tall, and some are female.

But they’re all people.

What gives the white male politicians the right to take away the liberties of others that are not like them? Because they were born white?

White male politicians, leave the people alone. Stay out of their bedrooms, prayer halls, libraries and schools. Let the people live their own lives!