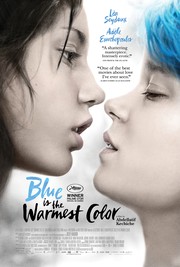 Adèle (Adèle Exarchopoulos) is a fifteen-year-old French school girl coming of age. An attractive young boy falls for her and gets her attention. She is looking for her first love, but things don’t quite turn out the way she expected. One day while walking in the city she notices a blue-haired girl and feelings well up that she does not quite understand. Eventually she connects with the girl whose name is Emma (Léa Seydoux), who is a few years older and an art student at college. Quickly the two fall madly in love and lust. They develop a complex relationship of a decade while they both find their calling, Adèle as a teacher, Emma as an artist. Love, passion and dreams all come together in an intense drama as their lives move forward.

Blue is the Warmest Color is over three hours long and very different from the general Hollywood fare. Rated NC-17, in French with English subtitles, the depiction of French life in the city is very realistic. I noticed how terribly rusty and dysfunctional my own French has become over the decades of non-use.

In the beginning, some of the scenes seemed too long and disjointed. As the story unfolds, ten years go by and sometimes I didn’t quite follow the jumps forward. But soon I fell into the cadence of the film, and I realized that sometimes it simply told the story by images, like a few seconds of sleep, or sitting in a bus, or walking down cobblestoned streets. A patchwork of images moved the action forward wordlessly.

While the picture above might indicate a pornographic bent, it is not so. The movie is actually not about lust or sex, but about intense passion. The two main actors are phenomenal in their depiction of intense emotion.

The photo above shows Adèle crying, her nose running, tears streaming down, and not for a minute does it seem acted. The passion invoked by love, lust, yearning, loss and betrayal is real throughout and left me speechless. While there is a lot of nudity and lesbian sex in this movie, the most passionate scene of all is when they are fully dressed and Adèle kisses the hand and fingers of Emma during a confession of love and need.

Blue is the Warmest Color is not for the prude and conservative. You have to be pretty open-minded. For me, watching this movie was an experience of passion in a coming of age story unlike any I can remember. It was an adventure.