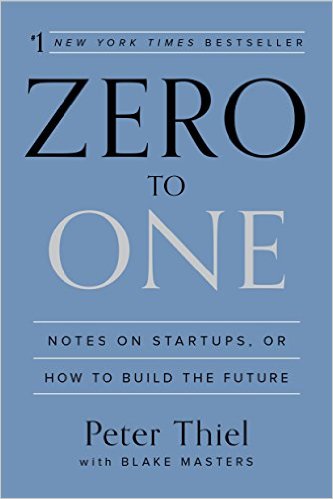 A book about startup businesses.

Thiel knows something about the subject. He was one of the founders of PayPal and sold the company in 2004. His share was worth several hundred million dollars. Then he bought into Facebook as its first outside investor in 2004, and got a 10% share for $500,000. He then became a venture capitalist, investing in many tech companies and listening to proposals from entrepreneurs every day. He is worth over $2 billion, and his is only 47 years old.

So when Thiel writes about how to build a startup business, it pays to listen.

He is definitely not modest. The book is full of sweeping generalizations and questionable statements of fact that really are just his opinions. He dismisses any business that does not have the potential to become another Facebook or Google.

He says that real entrepreneurs dress in T-shirts and jeans, not suits. Obviously, that’s an opinion, not a fact. He does not know all real entrepreneurs. But he is so full of himself, and so convinced of his methods, that he states those opinions as facts.

Here is such a passage:

The most obvious clue was sartorial: cleantech executives were running around wearing suits and ties. This was a huge red flag, because real technologists wear T-shirts and jeans. So we instituted a blanket rule: pass on any company whose founders dressed up for pitch meetings. Maybe we still would have avoided these bad investments if we had taken the time to evaluate each company’s technology in detail. But the team insight— never invest in a tech CEO that wears a suit— got us to the truth a lot faster.

This is just one example. But be that as it may, he knows something about startups. If you are working a job and you are happy doing it, don’t read this book. If you want to start a new Chinese take-out place in Palo Alto, definitely don’t read this book. It will crush you. If you want to start a lifestyle business, make a little money for yourself and your family, this book is not worth it.

But – if you want to start a company that makes a dent in the universe (to quote Steve Jobs), if your objective is to start a business that becomes a billion-dollar venture within a few years, this is absolutely, positively required reading.

Annoying, cocky, and maddeningly self-absorbed as Thiel is, he knows what to look for in a startup.