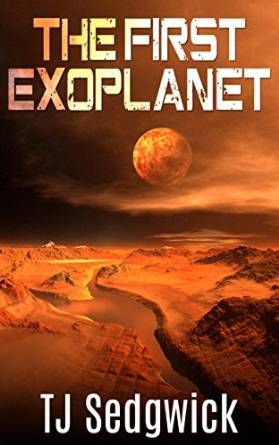 In the near future, around 2056, Earth has identified an earth-like planet around another star about 15 light years away. Trying to find expansion room for humanity, scientists discover a way to travel faster than light. Eventually the FTL drive (faster than light) is good enough to send a probe to the other planet to explore.

Earth soon finds out that there is already an intelligent civilization occupying that planet. Due to a mistake or a misunderstanding, the humans and the aliens immediately descend into a shooting war. Rather than finding another Eden for mankind to flourish in, humanity has a new enemy, one far more powerful and menacing than anything encountered on Earth before.

The First Exoplanet is a long book with elaborate sub-plots and detailed side stories. The writer seems to like Stephen King and tries to weave the stories of the individual characters together into a larger epic plot. He does not pull it off, however. Stephen King’s side plots always have a reason to exist in the greater story. In this book, the writer seems to want to build them in to provide substance, but in the end, they seem to just be a waste of time.

For example, there is a rogue and power-hungry Russian intelligence agent named Sergei Bekov, who is responsible for planting a computer virus into the American probe before it is sent off to the other star. The author paints Bekov as completely evil and reckless, to the point where he entraps a French scientist by using a teenage hooker. The whole story goes on and on, and provides great detail of the teenage hooker, how he engages her, and the sex they are having, all to make a very minor point. In the end, the entire Bekov character fades from the plot when he is no longer needed.

There are many other examples of this technique gone awry. The book of 552 pages could have been half as long, and just as interesting, if all this baggage had been simply omitted. I would never have missed the teenage hooker abuse in my quest to find out what happened next with the aliens. It was just clumsy writing.

Other reviewers have blasted the author for not doing better editing. I am a stickler for editing, including proper use of grammar, spelling and vocabulary. I did notice a few errors, but I must admit that it didn’t overwhelm me like in a few other books I have recently read.

I kept with it, because I like alien first-encounter books, and I kept turning the pages because I wanted to know what would happen next. The big problem hit me at the end: the book didn’t end, the conflict didn’t get resolved. It simply said: continued in the sequel.

I hate it when I read a book and I don’t know a sequel is coming, until the book slaps me with it on the last pages. The writer isn’t good enough for me to want to read another 500 plus page tome. What’s worse, when I spent about five minutes reading into the Amazon teaser of the sequel The Vassal World, all my questions about what happened in the first book were pretty much answered. Why the author didn’t resolve the story and make the first book standalone is beyond me. Rather than writing two 500 page books with lots of deadwood and fluff, he should have written one tight story of 500 pages and made the experience satisfying.

The author even entices the reader after the book to buy the next one, quoting that it costs less than a cup of coffee ($2.99). That may be true, Mr. Sedgwick, but most of us readers would gladly have paid $7.99 for a well written, polished and edited single book in the first place. It’s not the dollars I spend on a book that matters most to me. It’s my time.

I enjoyed the concepts, the story and the speculation. But The First Exoplanet was too amateurish for me to want to spend my time to read another 500 page book, no matter how inexpensive it is.