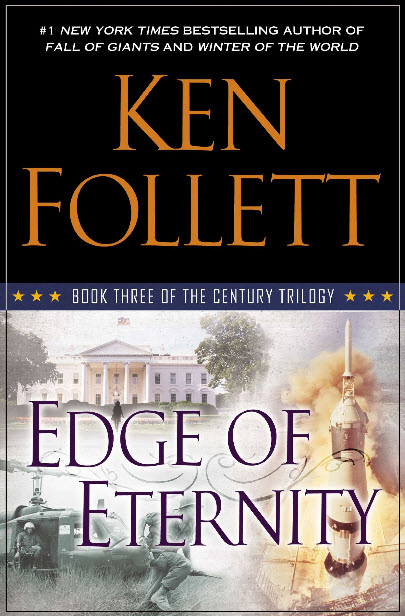 Edge of Eternity is another giant work by a giant writer, a thousand-page book that I could not put down. It is the third book of the Century Trilogy by Follett. There is only one thing wrong with the Century Trilogy: the way he named the books:

In Edge of Eternity, we still follow the main families that were introduced in the first two books, but now we are with the grandchildren. The story spans from 1961, the Kennedy presidency and the beginning of the civil rights movement, all the way to 1989 and the fall of the Berlin Wall.

In Russia, the patriarchs Grigori and Katherine are still alive, but the action surrounds their grandchildren, the twins Tanya and Dimka.

In the United States, Lev Peshkov is still a dandy, but George, his black grandson is the main character.

In England, Ethel still is the leader of the Williams family. Her grandson Dave, a musician, is the protagonist in this story.

Finally, the Dewars are also around, Cam and Beep, the grandchildren, being the leading characters.

Since it has been too long since I read the first two books, I had to pause occasionally to make sure I connected the story all the way to the present in this book, but as I kept reading, things kept coming together.

I love epics, and this trilogy is as epic as it gets.

Through the main characters, I got to be in the room with Krushchev in the Kremlin and Kennedy in the White House during the Cuban missile crisis. I was able to follow the civil rights movement and the thinking of its leaders like Martin Luther King. The pop music culture that dominated the sixties in England and the United States came alive through the band that Walli and Dave formed, called Plum Nellie. How did communism sustain itself through the leaderships of Krushchev, Breshnev and Gorbachev? Why did the East Germans build a wall to imprison its own people for decades, and how did they get away with it? And why did the Berlin wall eventually come down?

Following the main characters in this story, I felt I had a front-row seat with the major figures in the history of the 20th century and its huge movements. History came alive in front of my eyes, through all three of these works, unlike any other that I can remember reading.

Edge of Eternity is an extremely well written book and part of a powerful trilogy about the history of the 20th century.