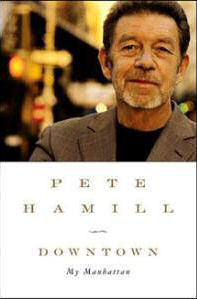 Pete Hamill is a New Yorker, and he loves to write about New York.

I first learned about him when I read his Novel Forever about five years ago. I gave that story a four star rating at the time.

In Downtown, Hamill simply tells the history of New York. And what a way to do it! Move over, history teachers. We think of history as a dry list of dates when things happened in a stuffy world we don’t care about anymore.

Hamill loves his city and he loves to tell about it. Of course, he can draw on his own lifetime for the last 70 years or so, but he owns and has read over 500 books on New York that he can draw on.

The outcome is a very readable tale, broken down into topical chapters, about one of the most fascinating cities of the world.

I was born and raised in Regensburg, Germany, a city literally 2000 years old with building sections and walls still in place built by the Romans in the B.C. days. As a kid,  I hung out in taverns and cafes in buildings built in 1300. Yet, I am fascinated about New York and its history, when the first tents were “only” pitched there by the Dutch settlers in 1625 or thereabouts. What is it about New York that made it so much the “center of the world” that it is today? What caused it that Regensburg is a city of 100,000 people – and not growing – after 2000 years, and New York started from some 200 people in 1625 and became the largest city in the world for many decades, and is still today the hub the modern world turns around?

It is the spirit of the New Yorkers that made the difference through the centuries and you have to read Downtown to understand what I am talking about.

One thought on “Book Review: Downtown: My Manhattan – by Pete Hamill”