In 1977 I lived in Cologne for about a year. I was a 21 year old soldier. Many a Saturday afternoon I would walk from my apartment, across the river, into downtown, and on my way I would walk past the awe-inspiring cathedral. 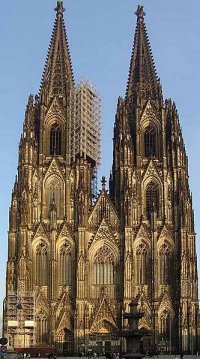 Yes, I looked up. Yes, I was awed, but what I was looking at didn’t really faze my youthful mind much.

After reading The Pillars of the Earth by Ken Follett, I studied up on cathedral construction, and I was fascinated with what I found out.

Check this link for a nice snapshot.

I didn’t know that for some time, the building was the highest building in the world, until the Washington Monument was constructed.

Construction began in 1248, but by 1560, political changes had taken place, and funds dried up. So all construction stopped until 1842.

There was a massive wooden crane on top of the south tower. There are no reports about its construction, but it can already be seen on the pictures of the Ursula legend which were painted around 1450. So once construction stopped by 1560, it had already been  there a minimum of 110 years.

Without funds, the cathedral remained unfinished and basically at a standstill until 1842, and the crane remained there, perched over the city.

This crane became the symbol of Cologne and it dominated its skyline for 400 years. The timescales are mind-boggling.  Entire generations lived and died, for four centuries, looking up at an idle  construction relic from, even for them, ancient times.

That temporary wooden construction crane was on top of the cathedral more than 50 years before Columbus went on his providential journey, and then it remained there, untouched, for longer than when the first settlers arrived in Jamestown, Virginia until now. I am sure many an altar boy climbed up to see it firsthand over the centuries, only to grow old and never, ever see it move.

This is the picture you would have seen from 1560 through 1848. Note the crane on the left side on top of the base of what would be the spire.

There are some interesting drawings and descriptions of the crane available at the official site of the Cologne Cathedral.

Then, during WWII, Cologne was almost obliterated. Many bombs hit the cathedral, and it was  severely damaged. It’s a miracle it stood. I have to believe that the bombers tried to protect it (unlike what the Taliban would have done had it had its chance). 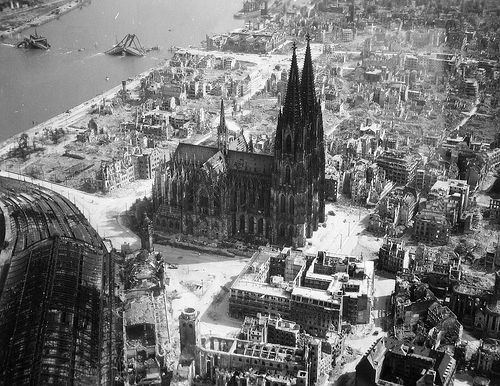 I am sure there are people who have spend their lifetimes studying just this one building and its history.

I am a mere passerby.

“Oh, look at the cathedral, isn’t it marvelous?”

“Let me get a picture of you in front of it.”

“Ok, let’s just go and check out these shops down that way.”

The good and comforting thing is: It will still be there, just like this, a thousand years hence, and nobody will remember me, or my ancestors, or my decendants, at that time.

And that is what it means to be a work of art.