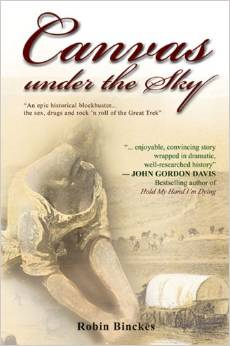 Boar is the Dutch and Afrikaans word for farmer, which came to denote the descendants of the Dutch-speaking settlers of the eastern Cape frontier in Southern Africa during the 18th century. They were originally Dutch farmers that eventually escaped British rule in South Africa by trekking north into the unknown North, the frontier.

Canvas under the Sky is a historical novel that plays in the 1830s in South Africa. Rauch Beukes is a young Boer of 17. As the story opens, he travels with his father to Cape Town to purchase supplies for the homestead. The trip takes several weeks each way by horseback and wagon. When they come home, they find the farm plundered and burned by the Xhosa natives. Rauch’s mother and sisters are dead. His brothers and their servants and slaves had found refuge with a neighbor. The family starts rebuilding.

Eventually, the Boars decide to leave the English colony and trek north. The migration is eventually known as the Great Trek. Rauch narrates the story of the trek, the hardships the settlers go through, and the many battles they fight against hostile natives of the Xhosa, Zulu and many other tribes that outnumber them fifty to one. The leaders of the trekkers are Potgieter, Retief, Maritz, Trichardt and Cilliers, among others, and reading Canvas under the Sky, some of those leaders come to life for the reader.

Reminiscent of the conquest of the American western frontier around the same period, the treks of the Boars in South Africa are not as well-known or documented, at least not to the average American reader, like me. While I knew there was a violent and bloody period, reaching all the way to modern times and Apartheid, I had never had the opportunity to familiarize myself with South African history and the details of the colonization. This book opened my eyes.

I got a sense of what the hardships of the settlers were, and how difficult it was to survive on the frontier. In America, we had the Indians. In South Africa, they had the Xhosa and Zulus, who didn’t appreciate the Europeans invading their lands and upsetting their customs. The book illustrates many bloody battles, where thousands of natives were mowed down by western guns and cannons, with casualties for the whites only in the dozens, if any. But I never really got the sense of where the wars were going. The whites are constantly portrayed as those with God on their side. They thank the Lord for the battles that they won, with thousands of black corpses surrounding them. No credit is given to the natives, who are portrayed as nothing but bloodthirsty wild animals that wanted to harm innocent God-fearing settlers.

The author loves to show battle after battle. The battles are always the same.  They do not really portray the underlying conflict. A naïve reader will put the book down and hate the blacks, who were really the ones that were violated in that period of history.

In Rauch’s life there are three women: Amelia is the daughter of an English settler, who is fifteen when he and his father, at the beginning of the book, come home from Capetown to find the homestead devastated. Rauch falls in love with her, but inexplicably, she loves his father, who is around 40 years old at the time, and she marries him instead. Amelia’s character never really makes sense, all the way through the story.

Then there is Katrina, the mulatto former slave come prostitute, who likes to service Rauch and eventually bears him a son. She is actually the woman that is most thoroughly developed in this book, whose motivations make sense and who cares about Rauch. But for some reason we don’t understand, he casts her away.

Finally, there is the beautiful Marietjie who loves him – why I can’t figure out – but who is married to an abusive English officer named Roddy. She also gets pregnant by Rauch.

Rauch’s Pa is also an old lecher who cheats on his wife (when she is still alive) and then steals the girl of his son. Pa comes across as a 40-year-old teenager who is interested in nothing but getting laid.

The sex scenes are plentiful, explicit and unfortunately also awkward and repetitive. Rauch always “kisses tenderly.” There is no normal kiss, just a tender kiss. Whenever a woman looks at him “he feels himself getting aroused.” When he orgasms, it’s always “indescribable.”

The sex scenes do the book a disservice. The motivations of Rauch and his women don’t make any sense. They seem to be contrived and appear to exist only to make a historically shallow book spiced up so it would appeal to high school kids. 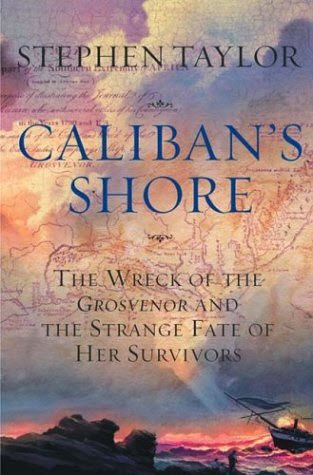 Subtitle: The Wreck of the Grosvenor and the Strange Fate of Her Survivors.

The true story of the ship Grosvenor, a vessel that made the journey from England to India in the 1780ies. On one of the trips back from India, it suffers a complete shipwreck on the eastern coast of what is today South Africa.

But the shipwreck was the easy part. We follow the survivors (most of the passengers) through the next several months and then years. A fascinating story, I learned much about the world in the 18th century, the nature of its trade with India, and how the colonies were run and governed. I found out many of the details of the class structure, what things cost, what was involved in an overseas journey, and of course, the state of southern Africa at that time.

Following this account takes you away from this world entirely. I am always fascinated by how little I know about the world. I swear, you could pick up this book, read it, and then spend the rest of your life studying that small part of history in that small part of the world.

I am also fascinated how many people in all times of history suffered so much more than any of us ‘moderns’ have ever suffered.

Reading Caliban’s Shore is not reading a book, it’s immersing yourself in another world, a world so exotic, so breathtaking, so alien, it leaves you stunned.